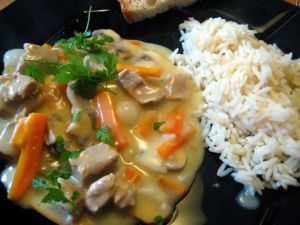 A blanquette de veau with the addition of carrots, accompanied by rice

Blanquette de veau or, particularly in France, Blanquette de veau à l'ancienne, is a slowly simmered veal stew that is served in a rich white sauce, generally accompanied by mushrooms and small whole onions. "Much-loved"[1] in France, it is also a standard, albeit old-fashioned, dish in many French restaurants in North America and the United Kingdom. It has never been considered a part of the "haute cuisine" in France, but is the sort of family dish that undoubtedly evolved from the ingredients commonly found on numerous farms; it is still to be found in bistros, brasseries, and the unpretentious neighborhood café run by a husband and wife. The veal in the finished dish is generally boneless and extremely tender; the sauce is a flour-thickened reduction of its cooking liquid of veal or chicken stock, aromatics, and vegetables, to which an enrichment of cream and egg yolks is then added. Mushrooms and small white onions are usually cooked separately from the veal and are added to the sauce before serving.