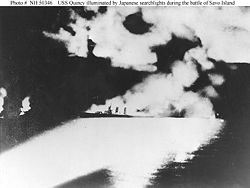 Part of the Guadalcanal Campaign, the Battle of Savo Island, in August 1942 three American cruisers USS Astoria (CA-34), USS Quincy (CA-39), and USS Vincennes (CA-44) as well as the Australian cruiser HMAS Canberra were lost in a Japanese night attack,[1] one of the worst defeats ever encountered by the U.S. Navy.[2] From the standpoint of the U.S. Navy, it was a textbook example of how not to exercise -- or not exercise -- command and control.

Two groups of Allied warships were protecting 19 transports anchored in the Guadalcanal area. Savo Island lies between the two larger masses. They were under the command of Australian RADM V.A.C. Crutchley, who was not present; he had taken his flagship, HMAS Australia, to attend a conference with the overall commander, RADM Richmond Turner, USN.

The senior officer, "Captain Howard Bode of the USS Chicago was left in command of [one] group, although the Canberra ahead of his ship acted as guide. The group was steering various courses in a general northwest-southeast line--the base patrol course was 305°-125° T.--reversing course approximately every hour." The command and control arrangements were untested.

"Admiral Crutchley's instructions were that in case of a night attack each cruiser group was to act independently, but was to support the other as required. In addition to the Melbourne warning, a dispatch had been received indicating that enemy submarines were in the area, and night orders placed emphasis on alertness and the necessity for keeping a sharp all-around lookout. The destroyers were to shadow unknown vessels, disseminate information and illuminate targets as needed. It was provided that if they should be ordered to form a striking force, all destroyers of Squadron FOUR except the Blue and Talbot were to concentrate 5 miles northwest of Savo Island. This arrangement was to cause some confusion during the battle. "[3]

The Japanese 8th Fleet, under VADM Gunichi Mikawa, combined the heavy cruisers IJN Chokai, IJN Aoba, Kinugasa, Kako, and Furutaka with the light cruisers Tenryu and Yubari, and the destroyer Yunagi. Mikawa lost no ships during the battle proper, although Kako was sunk by U.S. submarine S-44 (submarine) after the battle was over. Mikawa also did not attack vulnerable Allied transports.

Starting at about 2399 local time, and continuing for at least 1.5 hours, individual U.S. ships detected possible scout aircraft, but did not disseminate the reports. At approximately 0145, contact by the U.S. southern cruiser force made contact, with the enemy surface force. Simultaneously, Japanese aircraft dropped flares by aircraft over the transport area off Guadalcanal.