Basketball is a ball game played between two teams of five players each. The objective of the game for each team is to throw (or "shoot") the ball through one of a pair of hoops (or goals) located at their (offensive) end of the court while preventing the opposing team from doing the same (defense). Players may not "travel" while holding or carrying the ball. Instead they must bounce the ball against the floor while moving.

In December 1891, Dr. James Naismith, a Canadian physical education student and instructor at YMCA Training School (today, Springfield College) in Springfield, Massachusetts, USA, sought a vigorous indoor game to keep his students occupied and at proper levels of fitness during the long New England winters. After rejecting other ideas as either too rough or poorly suited to walled-in gymnasiums, he wrote basic rules (James Naismith's Original Rules of Basketball) and nailed a peach basket onto a 10-foot (3.05 m) elevated track. In contrast with modern basketball nets, this peach basket retained its bottom, so balls (the original balls used for this game were soccer balls) scored into the basket had to be poked out with a long dowel each time.

The first official basketball game was played in the YMCA gymnasium on January 20, 1892 with nine players, on a court just half the size of a present-day National Basketball Association (NBA) court. "Basket ball", the name suggested by one of Naismith's students, was popular from the beginning.

Basketball's early adherents were dispatched to YMCAs throughout the United States, and it quickly spread through the USA and Canada. While the YMCA was responsible for initially developing and spreading the game, within a decade it discouraged the new sport, as rough play and rowdy crowds began to detract from the YMCA's primary mission. However, other amateur sports clubs, colleges, and professional clubs quickly filled the void. In the years before World War I, the Amateur Athletic Union and the Intercollegiate Athletic Association (forerunner of the NCAA) vied for control over the rules for the game.

Dribbling, the bouncing of the ball up and down while moving, was not part of the original game except for the "bounce pass" to teammates. Passing the ball was the primary means of ball movement. Dribbling was eventually introduced but limited by the asymmetric shape of early balls. Dribbling only became a major part of the game around the 1950s as manufacturing improved the ball shape. 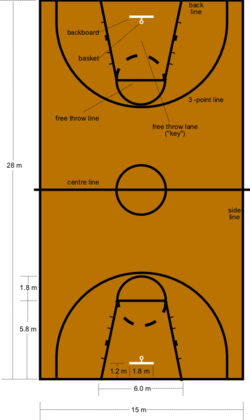 Today, every organization that has a branch involving basketball has its own rule book. This is meant to be a basic universal guideline, not the exact complicated version of the rules (some of which can be found through links below).

Each team is comprised of five players. The game starts with a jump ball at half court within the circle. Once possession of the ball has been achieved, it cannot be moved except either by dribbling or passing it. A player can only dribble once per personal possession. After a player has "killed" her dribble, he cannot move unless she is in the process of running, in which case he may take two additional steps. Shots taken from inside or on top of the three point line are worth two points; shots from outside of the line are worth three points. If a player is fouled (generally a bump hard enough to dislodge a player from his current position), her team will take the ball out from the sideline or the baseline depending on where the foul is committed. *exception* if the player is shooting while he is fouled, and misses that shot, he will get two free throws, but if she makes it will get two points for the shot and then will shoot one free throw. A free throw is a shot from behind the free throw line, the line within the circle nearest to the basket. Free throws are worth one point.

The most prominent professional basketball league both in the U.S. and internationally is the National Basketball Association (NBA). The NBA is comprised of 30 teams distributed across the U.S. and 1 in Canada (the Toronto Raptors). It is divided into two conferences: an Eastern and a Western Conference.

In the NBA, each player is allowed up to six personal fouls before being disqualified from the game. This is in addition to the two technical fouls that also leads to being disqualified. Flagrant fouls are a special type of personal foul that is called when the foul deemed excessively violent by the referee. A player can commit an offensive or defensive personal foul whether or not he or she is handling the ball or guarding someone who is handling the ball.