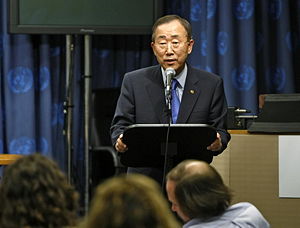 (CC) Photo: UN
Ban pays tribute after death of US Senator Kennedy in 2009.

In 1999, he served as Chairman of the Preparatory Commission for the Comprehensive Nuclear Test Ban Treaty Organization. In 2001-2002, as Chef de Cabinet during the Republic of Korea's presidency of the United Nations General Assembly, he facilitated the prompt adoption of the first resolution of the session, condemning the 9-11 Attacks, and undertook a number of initiatives aimed at strengthening the Assembly's functioning.[1]

Mr. Ban has also been actively involved in issues relating to inter-Korean relations. In 1992, as Special Adviser to the Foreign Minister, he served as Vice-Chair of the South-North Joint Nuclear Control Commission following the adoption of the historic Joint Declaration on the Denuclearization of the Korean Peninsula. In September 2005, as Foreign Minister, he introduced a Joint Statement to the Six-Party Talks.

Ban Ki-moon was born in 1944 in the city of Chungju, Korea.[2] He studied at Seoul National University and received a bachelor's degree in international relations in 1970.

In 1985 Ban Ki-moon was awarded a Master's degree in public administration from the Kennedy School of Government at Harvard University.[3]