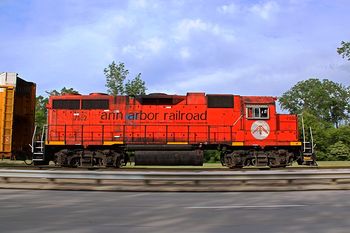 © Photo: Michael Harding
Ann Arbor Railroad No. 7802 in May 2012, the last unit to bear the road's classic orange livery.

The Ann Arbor Railroad (AAR reporting mark AA) is a regional (Class III) shortline railroad operating mostly in Michigan. It is the remnant of a 260 mile line that included trackage in Ohio, Michigan, the Upper Peninsula, and Wisconsin, and a trans-Lake Michigan ferry service.

In October 1869, a group of Michigan capitalists incorporated the Toledo, Ann Arbor and Northern Railroad Company (TAA&N) to build a railroad between Ann Arbor, Michigan, and the Michigan-Ohio state line aiming towards Toledo. They bought franchise rights and began construction. This prompted a connecting effort between the state line and downtown Toledo. The franchise rights for this segment were eventually acquired by the Pennsylvania Railroad. The State Line Railroad was chartered in June 1872 to build a connection between the downtown Toledo, Ohio, at Elm Street to the Michigan-Ohio state line about 5½ miles to the north.[1]

By 1873, however, with little progress and mounting obligations, the TAA&N fell victim to the Panic of 1873.

In 1877, James M. Ashley bought the unfinished TAA&N grade and reorganized the company as the Toledo and Ann Arbor Railroad Company (T&AA). With fresh money and ambition, Ashley completed the line to Ann Arbor in 1878. Ashley also in 1878 purchased the State Line Railroad from the Pennsylvania Railroad. At the other end of the line Ashley began thinking about tapping the timber regions of Michigan's thumb. The first step in this direction was to connect Ann Arbor and Pontiac, Michigan, by constructing the Toledo, Ann Arbor, & North Eastern Railroad, which Ashley incorporated in September 1878. By 1880, the line was complete to South Lyon and graded to Pontiac. The next step was to build from Pontiac into the thumb. In August of 1881, Ashley incorporated the Toledo & Saginaw Bay Railway for this purpose. However a month later a forest fire ravaged the area into which Ashley planned to build which led him to abandoned his designs to build northeast. He sold the graded right-of-way from South Lyon to Pontiac to the Grand Trunk Railway by the end of 1881, and he allowed the Toledo & Saginaw Bay charter to lapse.[2]

About this time, Ashley began reorganizing his railroad holdings. He incorporated the Toledo, Ann Arbor and North Michigan Railroad Company in 1884 and folded into it the T&AA and TAA&NE. The TAA&NM also began construction, in 1885, of the line south from St. Louis, Michigan, to Owosso. Ashley continued construction south to Leland (1886) and South Lyon. In 1891, Ashley abandoned the road between Leland and South Lyon, apparently relying on connections to carry bridge traffic. In 1896, Ashley constructed a new line between Ann Arbor and Leland through Whitmore Lake. The spur to South Lyon was shortly thereafter abandoned.

By 1891, the road had consolidated lines reaching to Frankfort and Elberta. These northern termini were chosen because of the natural harbor of Betsie Lake. In 1892, the T&AA became the first railroad to transit Lake Michigan with a fleet of car ferries.

The Ann Arbor in the Twentieth Century

In 1925, the Wabash Railroad gained control of the Ann Arbor and operated the line until 1963 when it sold its holdings to the Detroit, Toledo, & Ironton Railroad.

In 1973, the Ann Arbor defaulted on its bonds and went into receivership. In 1974, it joined other Northeastern and Midwest railroads in the massive reorganization under the Railroad Revitalization and Regulatory Reform Act of 1976. The United States Railway Administration (USRA) deemed that the southern portion of the line, between Ann Arbor, Michigan, and Toledo was reorganizeable and included it in the Final System Plan. The State of Michigan, however, deemed that the entire line was important to the state's economy and communities and arranged to purchased the entire line from the USRA. For a while, Conrail was the Designated Operator (DO) of the line.

The Ann Arbor in the Twenty-first Century

By the early 21st century, the AARR continued to operate about fifty miles of track between Ottawa Yard, its Toledo terminal, and Osmer, Michigan, its interchange with the Great Lakes Central. The AARR served mostly customers in the automobile industry and interchanged with CSXT, Norfolk Southern, Canadian National and the Wheeling & Lake Erie at Toledo; Canadian National and the Indiana & Ohio at Dundee, Michigan; Norfolk Southern at Milan, Michigan; and the Great Lakes Central at Osmer.

In 2012, Watco, filed with the Surface Transportation Board (STB) a request for exemption, which would allow Watco to purchase the AARR. The STB approved the sale on January 29, 2013.