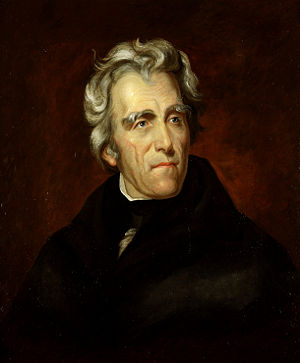 Andrew Jackson (1767-1845) was an American general who defeated the Indians of the Southeast and defeated the British at New Orleans in 1815. As seventh President (1829-1837), he destroyed the Bank of the United States, relocated the remaining southeastern Indians, and built a new political coalition, the Democratic party. A self-made man, Indian fighter, war hero and a fighter (and duelist) who believed in action instead of words, he was the iconic Western folk hero and came to typify popular democracy in the "Jacksonian Age" of the 1830s and 1840s.

Jackson, John Sevier, and their allies were rich frontier lawyers and businessmen who used their vast land holdings to establish themselves as a political power in Tennessee. They allied themselves with the Jeffersonian Republicans, of the "Old Republican" faction that opposed strong national government. Jefferson and his circle strongly disliked Jackson.

Cave (2003) argues Jackson acted illegally in pressuring Indians to move west of the Mississippi River in the 1830s. The Indian Removal Act of 1830 called for voluntary removal and included safeguards for Indian rights, but Jackson ignored and distorted the act to suit his purposes. The newly formed Whig Party actively opposed Jackson's policies, and congressional legislation dealing with Indian removal was hotly debated and passed only by narrow margins. Had Jackson followed the legal dictates of the 1830 act, he probably would not have achieved Indian removal, says Cave.

Jackson thought the voice of the people was supreme law. Although a man of powerful prejudices and passions, he identified with the voice of the people, and thought his election as president gave him the unique power to express that voice. His opponents misunderstood the voice and lacked the legitimate national base in any case. Thus Jackson denounced anyone who crossed him an enemy of the sovereign people. To fulfill this voice of the people in the political arena, he thought that the preservation of states' rights was an indispensable precondition to the achievement of people-oriented democracy. Although Jackson's record was erratic, when his presidency was done, federal authority was vastly weaker, and the states, for practical purposes, were much stronger than before, though as the Nullification criris proved, he would not tolerate defiance.