Turkey and refugees from Nazis

Albert Einstein in the 1930s played a role in saving a number of intellectuals through various safe-havens including one provided by the government of Turkey. He maintained a correspondence with them and later helped place some of these individuals at US institutions. To attain these goals he at times had to lend his name and reputation to American institutions he knew would not hire any Jews as professors. 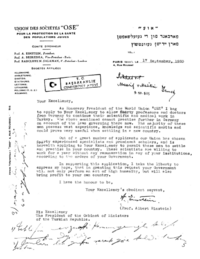 A letter dated September 17, 1933 carrying Albert Einstein's signature, but not written by Einstein,[1] pleaded for Turkey to invite “forty experienced specialists and prominent scholars... to settle and practice in your country."[2] The hand-written Turkish annotations indicate İnönü transferred the letter to the Ministry for National Education on October 9, 1933. The other annotations are attributable to Reşit Galip, the sitting Minister. One says: “this proposal is incompatible with clauses [in the existing laws],” another: “[i]t is impossible to accept it due to prevailing conditions,” indicating that at the outset the proposal was rejected by the Ministry.

Prime Minister İsmet İnönü responded on November 14, 1933, saying "Although I accept that your proposal is very attractive, I have to tell you that I see no possibility of rendering it compatible with the laws and regulations of our country. ... We have now more than 40 professors and physicians under contract in our employ. Most of them find themselves under the same political conditions while having similar qualifications and capacities.... Therefore I regret to say that it would be impossible to employ more personnel from among these gentlemen under the current conditions we find ourselves in."

That is, Turkey rejected his plea.

On the face of it İnönü’s letter appears to have closed the doors to Einstein’s plea. However, matters did not end with the position taken by İnönü. The Universite Reformu conducted at this time makes us think that someone at higher rank, that is president Mustafa Kemal [Atatürk], personally intervened in the matter.” Atatürk was determined to modernize Turkey. By 1945 Turkey had saved over 190 intellectuals. Initially, the majority were saved from Germany, then from Austria after the 1938 Anschluss, and again from Czechoslovakia after the 1939 Nazi invasion of Prague. Because of Turkey’s neutrality and influence at least one needed professional, dentistry professor Alfred Kantorowicz,[[1]] was liberated from a nine month incarceration in a concentration camp and allowed to proceed with his family to Istanbul.

There is little doubt that Mustafa Kemal Atatürk, Turkey's founder and first president, was personally involved with the emigre professors. Atatürk was in the midst of a major reform effort to modernize his new republic and saw this as an opportunity to encourage intellectual growth. Soon after the arrival of the first party he was known to have hosted a reception/banquet for them in the Dolmabahçe Palace . When the Shah of Iran visited Turkey for the first time, Atatürk personally arranged for Alfred Kantorowicz to create a set of dentures for him and for Ophtalmologist Joseph Igersheimer[3] to give the Shah an eye examination and prescribe new lenses.13. http://en.citizendium.org/wiki/Alfred_Kantorowicz

“What made Einstein the man of this century was not just his mind, it was also his soul”

The author thanks Ms Barbara Wolff of the Einstein Archives at the Hebrew University of Jerusalem for her learned and helpful advice on this matter. Personal communication.

See A. Reisman, Turkey's Modernization 190[2]. Some of the Emigres served as conduits of communication between colleagues, friends, and relatives left behind and others in the free world. It is a great fortune from a historical perspective that some of this correspondence was preserved for posterity. See Reisman, Arnold, German Jewish Intellectuals’ Diaspora in Turkey: (1933-1955). The Historian Vol. 69 no. 3 pages 450-478, Fall.