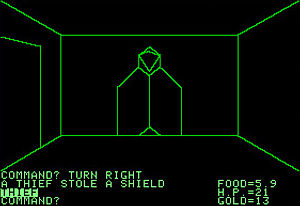 A thief attacks in Akalabeth

Akalabeth: World of Doom (1979, Apple II) was a computer game that was one of the first graphical role-playing games to appear on personal computers. Designed and self-published by Richard Garriot, it was the predecessor of the Ultima series of computer role-playing games published by Origin Systems. Due to its first-person, three-dimensional wireframe dungeon graphics, it was also a forerunner of the first-person shooter genre despite the fact that its frame rate was measured in seconds per frame rather than frames per second.

Richard Garriot programmed the game in BASIC at the age of 19. He was working at a ComputerLand retail store at the time and personally distributed the game in Ziploc bags until California Pacific Computer Company offered him a publishing contract. Garriott was inspired to create the game by Dungeons & Dragons and the works of J. R. R. Tolkien. Akalabeth was an attempt to provide a single-player computer simulation of the pen-and-paper role-playing game experience and its title is derived from Akallabêth, which is the fourth section of Tolkien's The Silmarillion. The game's working title was D&D28b, as Akalabeth was the 28th Dungeons & Dragons-inspired game Garriott created, however, it marked his first attempt at a graphical game.

Akalabeth is considered to be the first game of the Ultima series, one of the most successful computer game series of all time. Despite the massive success of Ultima, however, Garriot noted at the 2007 Develop Conference in Brighton that in terms of profit margin, Akalabeth is still the most profitable game he ever produced. He also mentioned that it was his mother, an artist, who taught him how to draw the perspective-correct lines that served as the basis for the game's wireframe dungeon graphics. 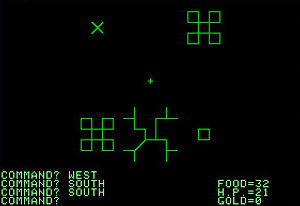 Map view of the World of Doom

The game is designed around three primary environments, the map view, the town view and the dungeon view. In the map view, the player, represented by a simple '+' symbol, explores a randomly generated world which includes wilderness, towns and dungeons, and receives quests from Garriot's alter ego, Lord British, who is found in the game's only castle. The world is bordered by mountains, thus constraining the player's movement. The control keys were somewhat unusual and dictated by the Apple II keyboard layout; while the horizontal arrow keys moved the player east and west, carriage return key was north, (forward in the dungeons), and south was the "/" key.

Akalabeth incorporated several subtle elements that helped set the game apart from other early attempts at computer role-playing. The necessity to provision the player with food meant that exploration time was limited, and players died of starvation as readily as they were slain by the denizens of the dungeons. The various quests assigned by Lord British provided a purpose to the player's actions as well as incorporating a more personal feel to the game. The food mechanism also served to demonstrate a variable timescale, as the player consumes food ten times faster while moving through the wilderness than he does exploring the dungeons. 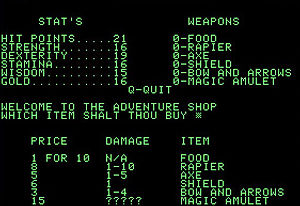