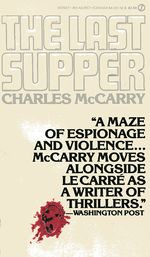 The Last Supper, published by E.P. Dutton in 1983, was the fourth of seven novels by the American novelist Charles McCarry to feature an American intelligence agent named Paul Christopher. xxx Later books by McCarry, ten in all as of 2013, expanded from focusing solely on Christopher into what might be considered a chronicle of the Christopher universe: two novels feature his cousins, the Hubbards, and in many of the Christopher novels his father, mother, one-time wife, and daughter play important and recurring roles. Also in this universe is a 1988 historical novel, The Bride of the Wilderness, about Christopher's ancestors in 17th-century England, France, and Massachusetts. McCarry had been an undercover operative for the Central Intelligence Agency for nine years before turning to writing, and his books were hailed for their apparent authenticity and realistic depiction of tradecraft. The Miernik Dossier received excellent reviews, and instantly established McCarry's reputation as one of the foremost American novelists of espionage. Like all of McCarry's books, this one displays "an almost Jamesian awareness of [its] European locale, the special authenticity of a loving expatriate writing of an adopted foreign land." [1]