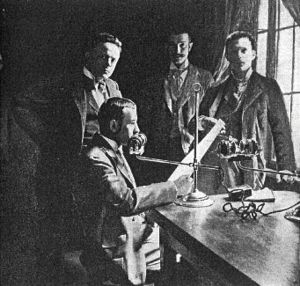 1901 photograph of a stentor (announcer) at the Budapest Telefon Hirmondó.
Telephone newspaper is a general term for the telephone-based news and entertainment services which were introduced beginning in the 1890s, and primarily located in large European cities. These systems were the first example of electronic broadcasting, and offered a wide variety of programming, however, only a relative few were ever established. Although these systems predated the invention of radio, they were supplanted by radio broadcasting stations beginning in the 1920s, primarily because radio signals were able to cover much wider areas with higher quality audio.

After the electric telephone was introduced in the mid-1870s, it was mainly used for personal communication. But the idea of distributing entertainment and news appeared soon thereafter, and many early demonstrations included the transmission of musical concerts. In one particularly advanced example, Clément Ader, at the 1881 Paris Electrical Exhibition, prepared a listening room where participants could hear, in stereo, performances from the Paris Grand Opera. Also, in 1888, Edward Bellamy's influential novel Looking Backward: 2000-1887 foresaw the establishment of entertainment transmitted by telephone lines to individual homes.

The scattered demonstrations were eventually followed by the establishment of more organized services, which were generally called Telephone Newspapers, although all of these systems also included entertainment programming. However, the technical capabilities of the time meant that there were limited means for amplifying and transmitting telephone signals over long distances, so listeners had to wear headphones to receive the programs, and service areas were generally limited to a single city. While some of the systems, including the Telefon Hirmondó, built their own one-way transmission lines, others, including the Electrophone, used standard commercial telephone lines, which allowed subscribers to talk to operators in order to select programming. The Telephone Newspapers drew upon a mixture of outside sources for their programs, including local live theaters and church services, whose programs were picked up by special telephone lines, and then retransmitted to the subscribers. Other programs were transmitted directly from the system's own studios. In later years, retransmitted radio programs were added.

During this era telephones were expensive luxury items, so the subscribers tended to be the wealthy elite of society. Financing was normally done by charging fees, including monthly subscriptions for home users, and, in locations such as hotel lobbies, through the use of coin-operated receivers, which provided short periods of listening for a set payment. Some systems also accepted paid advertising.

Below are short reviews of the some of the better-known systems used for distributing news and entertainment by telephone.

The first organized telephone-based entertainment service appears to have been the Théâtrophone, which went into operation in Paris, France in 1890. This system evolved from the experimental link Clément Ader had demonstrated at the 1881 Paris Electrical Exhibition. Although the service received most of its programming from telephone lines run to local theaters, it reportedly included regular five-minute news summaries, and also transmitted "music of its own production" during lulls in theater programming. The company established a series of coin-operated telephone receivers, in locations such as hotels, charging 50 centimes for five minutes of listening, and one franc for twice as long. Home listeners could also connect to the service, with a 1893 report stating that the system had grown to over 1,300 subscribers. The Théâtrophone ceased operations in 1932.

On February 15, 1893, the Telefon Hirmondó — the name was generally translated into English as the "Telephone News-teller" or "Telephone Herald" — began operation in Budapest, Hungary. Its founder, inventor Tivadar Puskás, died just one month after the system went into operation. This system was regulated by the government as a newspaper, with a designated editor-in-chief legally responsible for content. This would become the most prominent and longest-lived of the Telephone Newspaper systems, surviving in a limited fashion until 1944.

The lack of a means for amplification led to the Telefon Hirmondó employing strong-voiced "stentors" to speak loudly into double-cased telephones, so they could be heard throughout the system. The service was installed both in commercial establishments, including hotels and doctor's offices, plus private homes. Subscribers listened on headphones, and a loud buzzer, which could be heard throughout a room even when the service was not being actively monitored, was used to draw attention to important transmissions. At its peak, the service had thousands of subscribers, and many contemporary reviews mentioned that the subscription price was quite reasonable.

At the beginning the Telefon Hirmondó provided a short hourly news program over regular phone lines, however, this was soon expanded into a continuous service over the company's own lines. Its schedule in 1907 was as follows:

1925 saw the start-up of a broadcasting service using a newly developed technology — Radio Hirmondó, which shared the Telefon Hirmondó studios. Soon the Telefon Hirmondó became just an audio relay system, for persons who wanted to listen to the radio station without the trouble and expense of purchasing a radio receiver. The telephone distribution service was eliminated in 1944.

From 1895 to 1925, the Electrophone operated in London, England. It was organized in a similar fashion to the Paris Théâtrophone, working closely with the National Telephone Company and later with the British Post Office, which took over the national telephone system in 1912. Most of the Electrophone programming came from live performances via special lines connected to local theaters. On a few special occasions, it also shared programs with the Théâtrophone. Listeners ranged from hospital patients to Queen Victoria.

For locations such as restaurants, coin-operated receivers provided a few minutes of live entertainment for a sixpenny. The system also was accessible through the commercial telephone company, and home subscribers could choose between multiple programs — subscribers called an operator to have their telephone connected to the Electrophone service, specifying the length of time they wished to listen and the preferred program source. Because this tied-up the subscriber's line, incoming calls could not be received while listening to the Electrophone, although operators were instructed to break-in in case of emergency. The lucky few who had two telephone lines could use one to receive the Electrophone service, and the other to call the operators to change programs. The Electrophone ceased operations in 1925, unable to compete with radio. During its thirty years, the service generally had a few hundred subscribers, although by 1923 the number had risen to 2,000.

The operators of the Budapest Telefon Hirmondó were interested in licencing their technology to other sites, and at least two related systems were established. The l'Araldo Telefonico — Italian for "Telephone Herald" – began operation in Rome, Italy in 1910. In 1922, this system, which would eventually exceed 1,000 subscribers, was renamed the Fonogiornale. In 1924, individuals associated with the system started the first radio broadcasting in Rome. 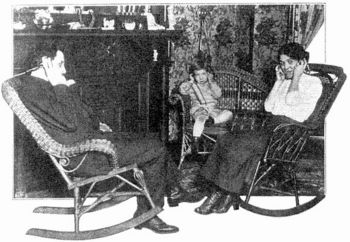 1912 publicity photograph of a family listening to the Newark, New Jersey Telephone Herald.
A second Telefon Hirmondó off-shoot was located in the United States, where the Telephone Herald in Newark, New Jersey (a suburb of New York City) began operation on October 24, 1911, but shut down due to economic problems the next year. At the time of its establishment, Manley M. Gilliam served as company president. The Telephone Herald's program service of news and entertainment was closely modeled after the Budapest operation. It also featured original children's stories written by Howard Garis, one of its subscribers, and two collections of these stories were later published in 1912: Three Little Trippertrots, and Three Little Trippertrots on Their Travels. In many repects, the studios, transmission schedule, and variety of material of the Telephone Herald resembled that of commercial radio stations several years later, but differed in that a subscription, rather than a sponsorship model, funded the system; subscribers paid $1.50 a month to receive the signal. The company, however, declined to read advertising copy over its lines, fearing that such material might "cheapen" their transmissions.