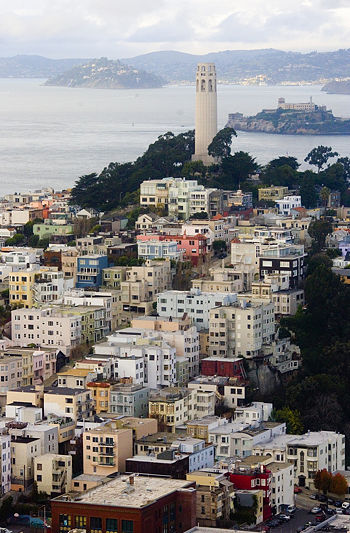 (CC) Photo: Thomas Hawk
Possible for inclusion in this article. Coit tower with Alcatraz in the background.

Hayford - San Francisco still is the financial center of California. WHen the big bank consolidation of the 90s was all done, the two left standing were BofA and Wells Fargo, both SF banks, which had bought out their LA rivals. The Pacific Stock Exchange is stillin SF, and there are lots of other financial companies still here. While they're not in SF, the venture capitalists of Sand Hill Road identify more with the Bay Area than LA, and there is no similar cluster in LA. So while there is more economic activity in LA, SF is still the center of finance. Anthony Argyriou 12:11, 3 April 2008 (CDT)

True. I had forgotten that big banks like Security Pacific (LAX) had disappeared. BUT, let's not forget that BofA, the quintessential S.F. bank, is now in North Carolina! But overall, I won't argue with you. There was, however, a time in which L.A. had taken over.... Hayford Peirce 12:49, 3 April 2008 (CDT)

Wells Fargo is now in Minnesota, and the third big bank ended up being Washington Mutual, taking over Home Savings and all its acquisitions. But Wells is still mostly run from SF, and BofA's California headquarters are in San Francisco. Anthony Argyriou 14:30, 3 April 2008 (CDT)

Just as important the Federal Reserve bank that covers the entire west is in SF. Richard Jensen 15:04, 3 April 2008 (CDT)

But unless there's a lot of Silicon Valley action going on in the Pacific Stock Exchange, I probably do as much trading as goes on there -- I think it's pretty moribund. Hayford Peirce 16:21, 3 April 2008 (CDT)