Supreme Court of the United States 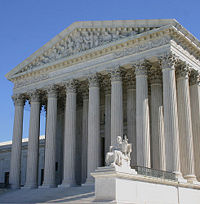 The Supreme Court of the United States of America is the highest federal court in the United States. It consists of nine justices, including a Chief Justice and eight associate justices. Justices are nominated by the President and confirmed by the Senate. Article Three of the U.S. Constitution defines the original and appellate jurisdiction of the Supreme Court, which includes appeals of federal and state cases and trials of cases where a State or foreign ambassador is a party, although the Eleventh Amendment somewhat limits the jurisdiction of federal courts. There is no constitutional specification of how many justices make up the Court, and Congress increased the number as the nation grew.

For more information, see: History of the Supreme Court of the United States.

The Supreme Court is the only court that is provided for specifically in the Constitution, which, in Article III section 1, vests the United States government's judicial power in "one Supreme Court, and in such inferior courts as the Congress may from time to time ordain and establish."

In the Judiciary Act of 1789, Congress determined that the Supreme Court would consist of a chief justice and five associate justices. The Supreme Court justices would meet in the national capital for two sessions each year and, when not in session, "ride circuit" to serve on intermediate appellate courts in the rest of the country.

From the John Jay Court to the John Marshall Court

The Chase Court and the Waite Court

The 1930s and FDR’s Court-Packing Plan

The current Chief Justice is John G. Roberts, Jr., whom George W. Bush appointed in September 2005. Roberts is a Harvard-trained lawyer and former Associate Counsel to the President.

The current associate Justices (in order of seniority) are: 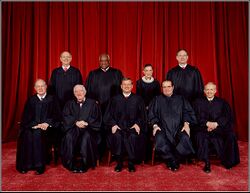