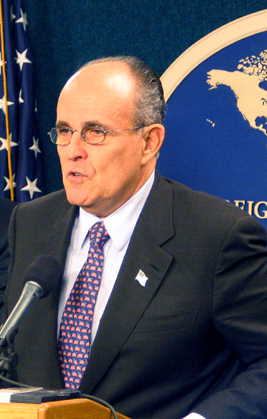 Rudolph William "Rudy" Giuliani, mayor of New York City (1994-2001), who gained worldwide fame after the 9-11 attack, was a brief front-runner for the 2008 GOP presidential nomination for most of 2007, but his campaign suddenly faltered in late 2007 and crashed. His best showing in the primaries was a weak 3rd in Florida in January 2008, so he pulled out and endorsed John McCain.

Giuliani brought a new, conservative approach to the ills of New York City. He argued that crime's root cause was not poverty but poor law enforcement; poverty was not alleviated by social welfare programs but perpetuated by them; and the public schools needed not more money but fewer bureaucrats. He made major efforts to reform city affairs, opposed at every step by labor unions, social-service agencies, the school bureaucracy, and identity-group politicians.

Downplaying his moderate views on abortion, gun control and immigration, Giuliani emphasized his heroic leadership of New York City in the 9-11 attacks, his cutting crime in New York, and his hard-line stance against terrorism. He was endorsed by Pat Robertson.

Although he campaigned vigorously, he was so focused on his own record that he did not make contact with what the voters were interested in. Worse, he could not shake off charges of corruption. He lost most of his support in the last two months of 2007. He won only 3.5% of voters in Iowa; 8.5% in New Hampshire; 2.8% in Michigan; 4.3% in Nevada and 2.1% in South Carolina. Pulling out of other states, he concentrated all his efforts in a losing battle for Florida, where he ran third with a mere 15%. Analysts noted the more voters saw of Giuliani, the fewer supported him.[1]

After Giuliani's poor showing in Florida, he withdrew from the race and endorsed John McCain.[2] Giuliani's strategy was to concentrate on the winner-take-all primary in Florida, which would deliver more delegates to the winner than all the previous races combined; however, the strategy failed, as national media reports concentrated on the candidates campaigning in the earlier primary races.