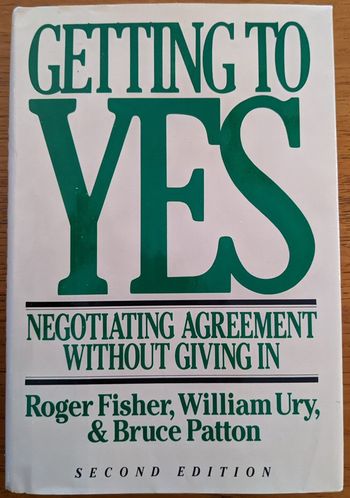 Roger Fisher (1922-2012) was a professor at Harvard Law School widely known for his work in negotiation. He authored (with William Ury and Bruce Patton) the seminal book Getting to Yes[1]. Professor Fisher was active in the Harvard Negotiation Project founded in 1979, which specializes in the "principled negotiation" style described in the book. Until his retirement in 1993 (?), Professor Fisher helped run a week-long course (Harvard Negotiation Workshop) at Harvard Law School and was its lead teacher for many years. The 5-day, intensive workshop consisted of attorneys, law students, people from the business world, and others[2].

Fisher's approach to negotiation requires each participant privately to determine, in advance, what would be their Best Alternative To a Negotiated Agreement (BATNA). This is where one puts a stake in the ground, and it is important to keep in mind what one's BATNA is, without necessarily explicitly discussing that with anyone else. Dr. Fisher recommended that people disentangle relationship interests from substantive interests and pursue each separately on its merits. He also believed that appeasement does not work. He reminded students that it is okay to be seen to be firm, but also okay to be flexible and reasonable during a negotiation (that it need not indicate weakness). He recommended that people focus on the "position" being discussed but at the same time, look behind the position to clarify the interests of other parties.

Fisher encouraged people to discuss what people might do without that giving any commitment that they will do a thing. He suggested it was helpful to invent options without commitment, and commit carefully only later. Thus, a negotiation should have, per Fisher, three distinct stages:

The words "should" and "ought" were banned from discussions as taught by Fisher. It is okay, he said, to make offers or set limits, but cautioned people to be aware of one-way communication where one side does all the talking and none of the listening. He warned against making a decision before discussing it: Always Consult Before Deciding.

Fisher's training usually started with a long session to innoculate people against the most common useless trick that can arise in a negotiation: "positional bargaining". It has no criterion for fairness. Think of a car salesperson starting with an outrageous offer, then cutting it way down and acting like they are offering a fantastic deal, all without having brought any evidence at all for why the price should be that particular amount. Fisher's advice was "never engage in positional bargaining." Don't even start.

Next, he would describe a legal plea bargain scenario, which is really an example of hardball. Again, he recommended against using a hardball approach in most negotiations, because it is not really a negotiation at all. It's a bargaining technique that in essence goes down sort of like a mugging: "I have this baseball bat, and if you don't give me the money from your wallet right now, I'm going to crack your head open with it." Yes, maybe giving the money is better than getting one's head cracked open. But that is not a negotiation, really--it is more of a threat avoidance technique. In the workshop, it was often difficult to get attorneys not to take that approach in any negotiation because they had been trained so strongly to do it.

In the negotation workshops, Fisher offered examples of language he thought could be helpful in a negotiation with a landlady, such as:

If people try to be tricky, recognize the tactic and raise the issue explicitly, advised Fisher. Question the tactic's legitimacy and desirability--negotiate over it. Here are some "tactics" that could occur:

Fisher emphasized that parties need to engage in side-by-side, hard-headed problem solving. He suggested trying lots of different things, such as:

The goal in the end is to come to the decider with one clarified choice, which meets some interests of both (or all) parties, and say "This is the best I can do to meet your interests. Give me some suggestions, criticisms, comments". Postpone all commitments to the end. Fisher called this the "one-text" technique.

During the course of the workshop, Professor Fisher told a number of anecdotes from serious negotiations in which he had been involved. In one, he almost blew up a negotiation by making assumptions about the other side that he had not checked out, and was saved at the last moment by having the other side reveal what he had not understood. In another, he mentioned a situation during the 1973 war between Egypt and Israel, when the Israeli Army had advanced and was situated a mere 100 km from Cairo. U.N. negotiators (of whom Dr. Fisher was one) were desperate to achieve a ceasefire at that point, but the Eqyptions would not agree and kept on insisting, "The Israeli flag must not fly over the Sinai desert." And finally someone realized exactly what was being said: the way to a cease-fire was not that the Israelis had to retreat immediately, but that they merely had to agree not to fly the Israeli flag on locations in the Sinai. The ceasefire was held up for days while all the negotiators believed Egypt was insisting on an immediate withdrawal of Israeli forces--an assumption not based on the actual language being provided by the Egyptian negotiators. In fact, all that Egypt really required was a public relations matter--lowering of Israeli flags, which made things look differently on television reports.

Another exercise in the workshop was to divide the group into pairs and then video-tape them while they attempted a negotiation. When the class reviewed these videos, everyone noticed that in one pair of mixed gender, the man insisted on doing all the talking, always interrupting and taking over from the woman. The man was in tears upon seeing this video, as he had had no idea that he was doing that and had apparently had a lifelong habit of doing that. Many participants were stunned to realize that such a behavior could be entirely subconscious and not deliberate.

The last day of the workshop was taken up by a large-sized group negotiation. These are highly risky, and the biggest risk is that the shyest, quietest person at the table will not have their voice heard, and yet in the end they may have veto power to prevent any agreement between the other parties from working successfully. This very often happens, so it is extremely important to make sure that all parties have a chance to express their concerns before attempting any resolution and that no important party's interests get overlooked, however quiet they may have been during the negotiation meeting.