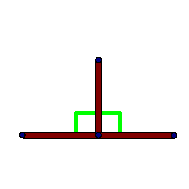 Diagram showing the definition of a right angle. The green parts are not part of the construction but show that the angles are both 90 degrees and equal to one another

In Euclidean geometry, a right angle, symbolized by the L-shaped figure ∟, bisects the angle of the line into two equal parts. The right angle is created when two straight lines meet perpendicularly at 90 degrees to each other.

The right angle is demonstrated:

The plus sign, +, consists of two such lines, and so the four angles at its heart are all right angles.