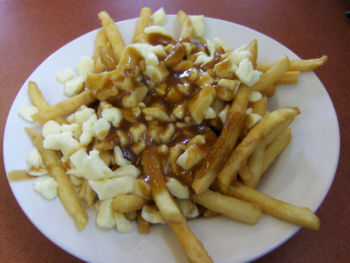 Poutine is a way of serving slices of deep-fried potatoes that is popular in the Province of Quebec, Canada.[1][2][3] [4][5]

While still hot, the potatoes slices, similar to those of french fries, are mixed with fresh cheese curds and then have hot gravy poured over them.

The National Post, in a retrospective, quotes Fernand Lachance, the self-described "father of poutine", as to how the dish got its name.[1] According to Lachance a customer asked him to mix the fried potatoes and cheese curds in a bag. Lachance says he replied:

According to Charles-Alexandre Theoret, the author of Maudite poutine!, the cheese curds are the key ingredient, and should be fresh enough to squeak, when bitten.[2]

The gravy is a later addition. Traditionally gravy based on chicken stock was used. There are variants, such as "poutine italienne" which replaces he gravy with a Bolognese sauce.

Poutine is not popular, or widely available, in the rest of Canada. Theoret is a political scientist, and his book uses poutine as a metaphor to discuss Quebec's role in Canada.

During the American Presidential campaign in the year 2000 Canadian comedian/journalist Rick Mercer asked candidate George W. Bush what he thought of the recent endorsement of his candidacy by Canadian "Prime Minister Jean Poutine".[5] Bush, who had been criticized for a lack of familiarity with the World outside the USA, was apparently unable to remember that the Canadian Prime Minister was named Chretien, not Poutine. The Montreal Gazette linked the rise in the popularity in the dish in the rest of Canada to Bush's unpopularity in Canada, and the ridicule to which this incident exposed him.