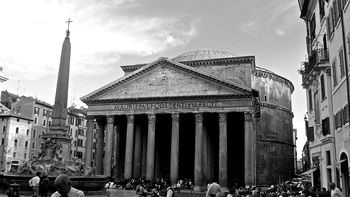 (CC [1]) Photo: Author: Jannis Andrija Schnitzer
The Pantheon was rebuilt by Hadrian, but retains the inscription stating that it was built by Marcus Agrippa.

The Pantheon in Rome was founded in the 1st century B.C. as a pagan temple, rebuilt in the 1st century A.D., and converted into a Christian church in the early 7th century. Located in the Campus Martius, the first phase of the Pantheon was undertaken by Marcus Agrippa during the reign of Augustus (the temple was dedicated in 25 B.C.). Emperor Hadrian completely rebuilt the structure early in his reign probably in the 120s, though the original inscription stating the Pantheon was built by Agrippa was retained and placed above the entrance. In 609 the Pantheon was consecrated by Pope Boniface IV as a church. By this time, the city of Rome was in a state of decline, with a much smaller population than during the Roman Empire, but the patronage of the church ensured the Pantheon was maintained.[1] Since 1980, the Pantheon has been part the UNESCO's World Heritage Site 'Historic Centre of Rome, the Properties of the Holy See in that City Enjoying Extraterritorial Rights and San Paolo Fuori le Mura'.[2]