Template:Chem Infobox Oxygen (chemical symbol O) is the most abundant (46.6%) chemical element of the lithosphere (the crust and the uppermost mantle of the earth). It is a constituent of water (H2O) and of rocks and sand in the form of silicon dioxide SiO2. A volume of earth atmosphere consists for 21% of the oxygen molecule O2. The O-atom has nuclear charge 8e, where e is the elementary charge, and 8 electrons, occupying the eighth position in the Periodic Table of Elements, i.e., its atomic number Z is eight. Atomic oxygen is very reactive, so that the element does not occur naturally in free form, but only in compounds.

The oxygen atom in its quantum mechanical ground state has the electron configuration 1s22s22p4. The ground state atom is in a 3P state, i.e., it is an electron-spin triplet (S = 1) and has orbital angular momentum quantum number L = 1. The O2 molecule in its ground state has the electron configuration 1σ2g 1σ2u 2σ2g 2σ2u 1π4u 3σ2g 1π2g. The highest occupied molecular orbitals, 1πg,x and 1πg,y, are directed perpendicular to the bond; they are are singly occupied. The electrons occupying these two orbitals couple to a triplet spin. Hence the O2 molecule is a spin triplet in its ground state and is therefore paramagnetic. The binding energy of the molecule 16O2 is 493.5 kJ/mol with an equilibrium bondlength re of 0.1207433 nm.[1]

The oxygen atom in compounds is very electronegative, second only to fluorine. Oxygen is a strong oxidizer, so that many elements appear as an oxide. The best-known oxides are: dihydrogen oxide (water), carbon dioxide ("carbonic acid"), nitrogen oxide and nitrogen dioxide, nitrate (NO3 in nitric acid and its salts), sulphur dioxide, sulphate (SO4 in sulphuric acid and its salts), and ferric oxide Fe2O3 (well-known in the form of rust, which is ferric oxide plus crystal water).

About 94.2 kJ/mol above the triplet ground state of O2 there is a singlet state. In the isolated molecule, the transition from triplet to singlet is strictly forbidden. As a consequence, singlet oxygen in the gas phase is extremely long lived (72 minutes). Interaction with solvents, however, reduces the lifetime to microsecond or even nanoseconds. The chemistry of singlet oxygen is quite different from that of triplet oxygen.

The molecule O3 (ozone) is relatively stable. At normal temperature and pressure it decomposes slowly according to: 2O3 → 3O2 + 69 kcal/mol. In the outer atmosphere (stratosphere) ozone is formed under influence of ultraviolet (UV) light.

Molecular oxygen can be prepared by the heating of several oxides, for instance the heating of mercury oxide gives: 2HgO → 2Hg + O2. This was the reaction used by Scheele and Priestley (see the history section).

A well-known manufacturing process of very pure oxygen is the electrolysis of water. Two electrodes are immersed into a vessel of water and are subjected to a voltage difference of at least 0.83V. At the cathode (the negative electrode) the following reaction occurs:

so that the net effect is electron transport from cathode to anode and the formation of gaseous hydrogen at the cathode and gaseous oxygen at the the anode. This process, which requires electrical power, is energetically not very efficient.

The most efficient process is the fractional distillation of liquefied air by the Linde process, invented by Carl von Linde in 1895. This is the process that is widely used in the industrial manufacturing of oxygen. 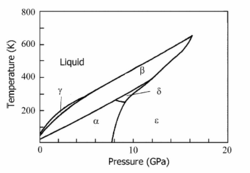 The standard atomic mass—the average over different isotopes weighted by abundance—of oxygen is 15.9994 u. (The unit u is the unified atomic mass unit). The following are the atomic masses of the stable isotopes with their abundance in brackets:

Besides these stable isotopes, a number of short-lived (i.e., radioactive) artificial isotopes of oxygen are known. The longest living of the non-stable isotopes is 15O, which has atomic mass 15.0030656 u and has a half-life of 122.24 seconds.

Almost all organisms need oxygen for their cellular metabolism from which they obtain their energy. By aerobic respiration the required oxygen is imported from the air and some waste products, such as carbondioxide, are released. For mammals red blood cells containing hemoglobine are an important mediator in the transport of oxygen to the tissues. A human can survive for only a few minutes without oxygen, irreversible brain damage occurs if there is lack of oxygen for a longer period.

Large quantities of oxygen are removed daily from the atmosphere by combustion of fossil fuels by industry, traffic, and house heating. Also the respiration of aerobic organisms consumes oxygen. The only source of replenishing is the process of photosynthesis, which occurs in green plants. In fact, it is generally assumed that this process is responsible for the existence of gaseous oxygen in the earth's atmosphere and that higher forms of life only became feasible after sufficient oxygen had been supplied by photosynthesis.

Most industrial oxygen is used in the basic oxygen steelmaking process. In this method pure oxygen is blown into a bath of molten blast-furnace iron and scrap. The oxygen initiates the oxidation of such impurities as carbon, silicon, phosphorus, and manganese, yielding relatively pure steel. Industrial oxygen is also used to make a mixture of carbon monoxide and hydrogen called synthesis gas, used for the synthesis of methanol and ammonia.

Another application is in oxyfuel welding, where pure oxygen is used to burn a fuel (often acetylene C2H2), so that temperatures are obtained that are high enough for welding.

Liquid oxygen is used as an oxidator in rocket fuels.

Today we know that the burning of wood and other fuels is a process of oxidation. It is a chemical reaction of fuel with oxygen from the ambient air, yielding mainly heat, carbondioxide (CO2), and water (H2O). Although this chemical reaction is the most important discovery in the history of mankind, for many centuries the combustion process was not at all understood. The first step in understanding came in the early 18th century when Georg Ernest Stahl conjectured that in the combustion process a substance called phlogiston escapes from the flames. This idea was adopted by many chemists, among whom the independent discoverers of oxygen Carl Wilhelm Scheele (in 1771) and Joseph Priestley (in 1774). They discovered what Priestley called dephlogisticated air. Soon after (1777) Antoine Laurent Lavoisier communicated to the French Academy that dephlogisticated air is a constituent of several acids and hence must be a chemical element. Because Lavoisier believed (erroneously) that the presence of oxygen in an acid was essential, he proposed to replace the name dephlogisticated air by oxygen meaning generator of acidity. (The old-Greek word for wine vinegar being oxys—όξύς, from the Greek word for sharp, also όξύς). Lavoisier understood that oxygen was an important part of air, and this fact was proved beyond doubt when oxygen was separated from liquid air by distillation (1883).