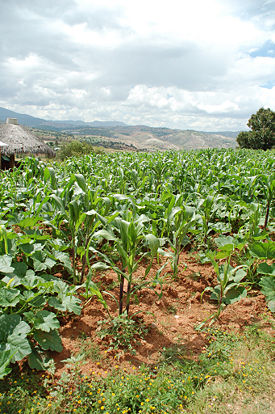 (CC) Photo: Joey Hipolito
Milpa plots are found from Chihuahua to Central America. This one is in Oaxaca, Mexico. Squashes are being grown between the rows of maize.

Milpa agriculture is a form of swidden agriculture that is practiced in Mesoamerica. Traditionally, a "milpa" plot (from the Nahuatl word for "corn field") is planted with maize, beans, and squash (known as the Three Sisters) and might include a variety of other plants. These plots are planted for two or three years and then allowed to lie fallow for some years in order to restore the fertility of the soil. Milpa agriculture varies somewhat by region and it has changed in a variety of ways in different areas but it remains an important part of life for millions of people throughout Mesoamerica.

Maize and beans, which are the staples of the Mesoamerican diet, complement each other in terms of the health of the fields as well as the health of the people who eat them. Maize requires high levels of nitrogen in the soil to grow properly and quickly depletes the soil if planted alone. Bean plants (genus Phaseolus), on the other hand, are high in nitrogen and their presence extends the life of the maize plot significantly by helping to keep nitrogen levels healthy. One might say that the maize repays the debt it owes to the beans by providing stalks for the bean plants to cling to as they grow. Squashes, generally grown between the rows of maize stalks, also figure into this symbiotic relationship, as they cover the ground in between the rows of corn and help to keep weeds down.

Maize and beans also compliment each other nutritionally. If eaten alone, one would need to consume large amounts to fulfill human dietary requirements but when eaten together, they achieve "protein complimentarity."[1] That is to say, a person needs less total food if the two are eaten together. This diet is further supplemented by several varieties of squash and other foods that are planted along side the maize and beans. In many areas, the "Mesoamerican trio" (maize, beans and squash) is complemented by wild or semi-domesticated plants that grow in and around the milpa. 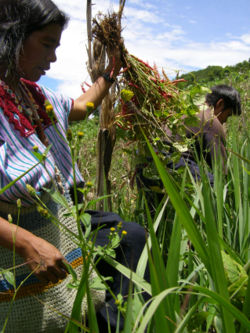 Milpas are traditionally cultivated using the swidden, or "slash and burn" system. The forest is cut, allowed to dry and then burned. The left over ashes are then mixed into the soil as a fertilizer. Maize and beans are planted together in the same hole while squash is planted separately, in between the rows of maize. Other cultigens may be planted in a separate section of the field or scattered among the maize.

The fields must be weeded several times throughout out the season. This is backbreaking work, especially in areas where a milpa is likely to be planted on the slope of a mountain several hours walk from home and it is usually done mostly by hand with the help of machetes and hoes. Later in the season, weeding is less needed, as the broad leaves of the squash plants keep unwanted plants to a minimum and the maize grows out of reach of the weeds.

Beans and squash are harvested as they ripen. As the maize ripens, a few elotes (or fresh cobs) may be picked to be eaten right away but most of the plants are bent near the top and the cobs are allowed to dry in the field. Once they are dry, they are collected and stored for later use in traditional Mesoamerican foods like tortillas and tamales. The dry stalks are often collected and sold at market as fodder for animals and the husks are frequently saved for use in preparing tamales.

The weeds and left over corn stalks from the previous season will be burned to prepare the fields for planting for one or two more years but then they will be left to fallow for as much as ten or more years. This practice has been abandoned in many areas because of the shortage of land that is available to many families. Instead, animal dung or ashes from the hearth at home may be added to those mixed into the soil and many farmers have turned to industrial fertilizers that allow them to cultivate the same plot year after year.

The ritual life of the milpa 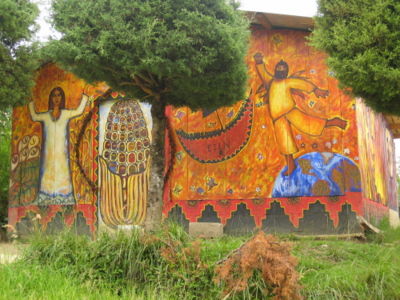 One of many ornate murals in the Zapatista community of Oventic in Chiapas, Mexico. One need not look far to discover the intimate connection between maize and people in Mesoamerican culture. Here, a human head wearing the characteristic Zapatista ski mask appears on every kernel.

Several important rituals are performed at key points during the growing season. The timing of these rituals varies by region and altitude due to variations in climate and the length of the growing season but they are invariably tied to significant events in the ritual calendar. Among the Maya, agricultural rituals are performed at the full moon[2] while in central Mexico, each ceremony is associated with one of the eighteen months in the solar calendar and occur at periods of twenty days.[3] Ceremonies are performed at each major stage in the development of the maize, beginning with the planting and concluding with the harvest.

Agricultural rituals also vary in form according to local traditions, but common themes are found throughout Mesoamerica. One such theme is the ritual reenactment of the creation of the world by marking the four cardinal directions. Among the K'iche' of highland Guatemala, offerings are made at the four corners of the milpa. The Kekchi plant maize in the center of the field first and then plant in each of the fours directions.[2] In Tepotzlán, the Nahuas place crosses made from pericón at the four corners of the field.[3] And in the Sierra Madre of northern Mexico, the Tarahumara open their work parties by scattering tesguino, or corn beer, to the four directions.[4][5] Other themes include sacrifices and offerings to indigenous deities or Catholic saints and prayers for rain.

Maize also figures prominently in ritual activities that are not directly connected to the cultivation of the milpa. In Amatlán, Nahua villagers say, "Corn is our blood,"[6] meaning, "corn defines our way of life" in everything from ethnic identity to every day activities. In fact, the Popul Vuh reveals that the first mothers and fathers of the Maya were actually formed from maize.[7] Maize, and especially the intimate connection between maize and humans, arises again and again in both ancient and modern myths.

One consequence of the changes in land ownership patterns introduced through Spanish colonial society and some of the agrarian reforms carried out by the modern states in the region is that many families do not own enough land to produce all of the food that they need in a year. Consequently, the practice of fallowing the fields has disappeared or nearly disappeared in many areas. Today, many farmers use chemical fertilizers to increase their fields’ production and engage in other economic activities to earn enough money to provide for their families.

Even when farmers have access to enough land to feed their own families, they are often unable to market their surplus. Trade liberalization and market deregulation policies adopted throughout the region in the 1980s and 1990s have meant that maize and other staple crops produced on a very large scale by U.S. corporations are frequently available at lower prices in local markets than the products of local farmers.[8] Thus, many farmers have also converted their fields to other crops. Today, cash crops destined for export to the U.S. include broccoli, snow peas, cucumbers, Brussels sprouts, and carnations.

Despite the market pressures felt by small scale farmers in Mesoamerica to turn away from traditional agriculture, milpas may hold information that can help improve modern agricultural methods. Monocrop agriculture creates artificial growing conditions that are significantly less biologically diverse than the natural ecosystems that they replace. This results in rapid depletion of the soil, which is generally counteracted by the application of chemical fertilizers that return nutrients to the soil but may have damaging effects in the long-term. Though it is unlikely that the balancing diversity of milpa agriculture can be reproduced on an industrial scale, the indigenous knowledge embedded in its design may provide some guidelines for improving industrial techniques. "By studying [the milpa's] essential features," writes Charles C. Mann, "researchers may be able to smooth the rough ecological edges of conventional agriculture."[9]