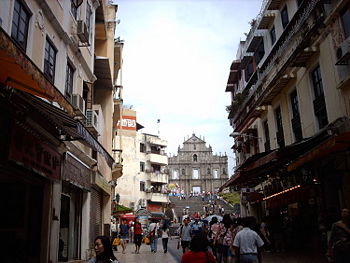 (CC) Photo: Derek Harkness
Sao Paulo Cathedral, Macau.
Macau Special Administrative Region (SAR), in the People's Republic of China, is a former Portuguese overseas colony. Macau may also be spelt Macao. In Chinese it is 澳門, which transliterates to Àomén in Hanyu Pinyin or Ou3Mun4 in jyutping Cantonese.

Macau comprises a peninsula and two islands, Taipa 氹仔島 and Coloane 路環島, in the Pearl River delta in the south of the People's Republic of China. A narrow land border joins the Macau peninsula to Guandong (Canton) province. A second border point is formed by the friendship bridge, which joins the newly reclaimed land of Cotai 路氹城 to the mainland.

Macau is relatively small, covering just 28.2 square kilometres of land as of 2005. This figure is increasing as land reclamation work continues. The city of Macau is located on Macau Peninsula. Most old buildings are found on the peninsula. The old center of Macau contains a large number of colonial Portuguese buildings that have been designated as a UNESCO World Heritage site covering 25 locations throughout the city.

To the south of the peninsula are the two Macauese islands of Taipa and Coloane. Three bridges join Taipa to Macau city. Between Taipa and Coloane, a large area of land has been reclaimed. This district is known as Cotai and is the scene of much industrial and commercial development, with many large casinos setting up here. Off the east coast of Taipa, another large area of reclaimed land forms Macau International airport. Because of poor communication links between the islands, Taipa and Coloane have only recently been developed.

Like Hong Kong, Macau has retained special status within the People's Republic of China. Under the system of one country, two systems, Macau has a highly independent government and legal system that is distinct from the rest of China. The region has its own currency, the pataca, though mainland renminbi (RMB) and Hong Kong dollars are widely accepted. Also, like Hong Kong, Macau SAR has its own customs and immigration policies. This means that travel between Macau and Hong Kong or mainland China are treated in similar fashion to travel between foreign countries, requiring the associated passports, visas and customs checks.