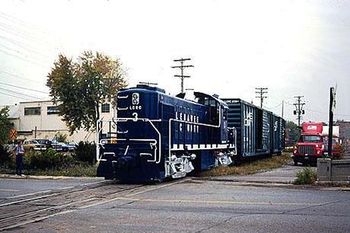 The Lenawee County Railroad Company (AAR reporting mark LCRC) was a short-line railroad operating between 1977 and 1990 in Lenawee County, Michigan.

The Lenawee County Railroad Company was incorporated on March 9, 1977, by a group of Adrian businessmen. The railroad began operations on the eighteen miles between Adrian and Riga, Michigan, sometime in October 1976, as a "Designated Operator" for the state of Michigan on a route scheduled for abandonment by the United States Railway Administration's Final System Plan. The LCRC ended operations on September 30, 1990. However, as the state had designated the lines as essential to the local economy, it in turn purchased the railroad. The state contracted with private companies to operate the line until the legislature forced divestiture in 2000.

In July 1998, the Michigan legislature revised the state's transportation goals. These included minimizing state subsidies for rail operations deemed to be commercially viable. Under the program competitive bids were accepted and in November 2000 the LCRC was sold.[1] The Adrian and Blissfield Railroad bought the line for $1.7 million. MDOT Director James DeSana said that the Adrian and Blissfield "exhibited the greatest potential to provide efficient and reliable rail service."[2]

The LCRC owned and operated three locomotives. Alco S-2 No. 1 was named the Addison B. Comstock, Alco S-2 No. 2 the George Crane, and Alco RS-1 No. 3 the Howard D. White.