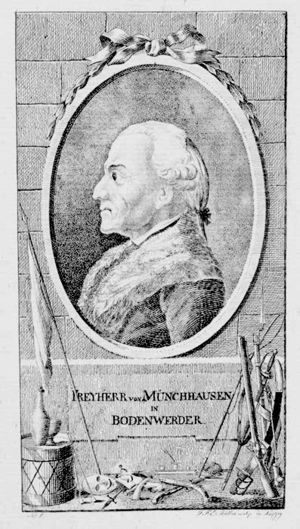 Karl Friedrich Hieronymus, Freiherr von Münchhausen (May 11, 1720 – February 22, 1797) was a German aristocrat, who gained fame later in life for a series of facetious travel and adventure tales penned under his name. As a young man, Münchhausen served as page to Anthony Ulrich II, the Duke of Brunswick-Lüneburg. He secured a military commission in the Russian army, where he served until 1750, distinguishing himself in two campaigns against the Turks.

On his retirement from active service, the Baron became well known for his entertaining tales of his military campaigns, in the retelling of which he was said to be given to exaggeration. This reputation apparently was the inspiration for a series of stories, published beginning in 1781, in which a certain "M-h-s-n" described in comically expansive detail his exploits during the war. Rudolf Erich Raspe, who may himself have been the author of these German tales, put forth a volume in English based upon several of them in London in 1785. The stories proved immensely popular, and were soon translated back into German, much to the Baron's embarrassment.

Münchhausen married Jacobine von Dunten on February 2, 1744; they were happily married for more than 40 years, but had no children. After his wife's death Münchhausen married the 20-year old Bernhardine von Brünn, but the marriage ended a few months later, followed by ruinous divorce proceedings.