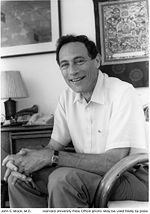 John Edward Mack (October 4, 1929, New York, New York–September 27, 2004) was an American psychiatrist and author who won the 1977 Pulitzer Prize for biography with A Prince of Our Disorder: The Life of T.E Lawrence,[1] but was best-known to the general public as an investigator of supposed abductions by aliens in unidentified flying objects. This research, as well as his public statements concerning it in his later years, became controversial because of his position at Harvard Medical School and was not always met with acceptance by officials at Harvard University. Following the publication of his 1990 book, Abduction: Human Encounters with Aliens. the university, for the first time in its history, launched an investigation of the work of a tenured professor.[2] After much controversy in faculty circles, Mack retained his tenure.

In his various areas of interest, he used a transpersonal psychology, which includes the possibility of non-ordinary realities; this is consistent with his observations that abductions might be spiritual rather than physical.

the physical world and all its laws represent only one of an indeterminable number of possible realities whose qualities we can only begin to apprehend through the evolution of our consciousness. In this view, consciousness pervades all realities and is the primary source or creative principle of existence, including the energy-matter of the physical world.[3]

Mack graduated from Oberlin College in 1951, received his medical degree from Harvard in 1955, and then graduated from the Boston Psychoanalytic Society and Institute. He joined the Harvard Medical Facility in 1964 and became a medical professor in 1972. He served in the U.S. Air Force from 1959 to 1961.

Mack lived in Cambridge, Massachusetts where he started the psychiatry unit at Cambridge Hospital where he served as chief of the department from 1969 to 1977. In 1977, his book, A Prince of Our Disorder: The Life of T. E. Lawrence won the Pulitzer Prize for Biography. Mack was also an assistant editor of the Journal of the American Psychoanalytic Association and was on the editorial board of the American Journal of Psychoanalysis.

During his career, Mack was "...was drawn to psychoanalytic analysis of the misunderstood or vulnerable, including children contemplating suicide, teenagers troubled by the threat of nuclear war and finally, people plagued by what they believed to be recurrent alien encounters".[7]

At the 1988 T.E. Lawrence symposium, he spoke of Lawrence's view of the Middle East and how it applies to today's politics. In response to Steven Tabachnick's observation that "Lawrence (unlike the pro-Arab Gertrude Bell or the pro-Zionist Richard Meinertzhagen) was one of the few and one of the last people in his own time and ours to achieve true sympathy for both national movements. His references to both movements in Seven Pillars are positive", Mack said

Neither Lawrence, nor Weizmann when he wrote of Lawrence, foresaw World War II or the European Holocaust and the overwhelming pressure of immigration and for creation of a Jewish state. Nor did either predict the subsequent seemingly irreconcilable clash of nationalities between the Jews and Arabs of Palestine...Lawrence did not anticipate the degree to which the region would be caught in the geo-political maelstrom of superpower rivalries, or the coming together of U. S. strategic interests, American Jewish support for Israel and the political power of the American Jewish community to tilt U. S. policy in the direction of Israel in the Arab Israeli conflict.

Reflecting on how Lawrence might have viewed the 1991 Iraq War, Mack wrote, "He would, I suspect, have loathed Saddam Hussein and feared, as we have, his bid for power in the region. But I doubt Lawrence would have recommended the heavyhanded methods that we have applied to the problem Hussein has presented--methods, I understand, adopted without the advice of Arab and Mideast experts within our government." The rest of the article directly criticized U.S. policy.[8]

He founded the John E. Mack Institute in 1989 as the Center for Psychology and Social Change, a year before the publication of his first book on alien abduction. In 1993, he started the Program for Extraordinary Experience Research with a grant from Laurance Rockefeller.

After publication of the 1990 book, a Harvard faculty committee was formed to review Mack’s “clinical care and clinical investigation of his subjects.” After 14 months of investigation, it released a statement saying that it "reaffirmed Dr. Mack's academic freedom to study what he wishes and to state his opinion without impediment."[7]

Alan Dershowitz wrote that the investigation had a chilling effect on academic freedom.

If Dr. Mack had taught at the Divinity School, it is unlikely that any investigation would be tolerated, since divinity schools are not governed by the laws of science. Indeed, it is at least as likely that space aliens exist as it is that God exists. The former is, however, a scientifically testable hypothesis (at least in theory); whereas the latter—for at least most theologians—is not. It is a matter of “faith,” not proof, and faith is not subject to the scientific method. But the paradigm of the scientific method—propositions subjected to double-blind and replicable experimentation—is not the only criteria for evaluating academic undertakings. This is certainly true in the formative, exploratory phases in the development of an idea. If Sigmund Freud, Karl Marx or Martin Buber had been required to satisfy a committee before they could continue their research the world might have been deprived of significant insights.[9]

In 1999, the Harvard Divinity School indeed hosted a program by the Mack Institute's Program for Extraordinary Experience Research (PEER). [10]

Feeney also wrote that Mack, based on over 200 interviews, believed alien encounters were more of a spiritual nature rather than a physical one.

In an article at the John Mack Institute, Virginia Goodchild wrote

It is possible, therefore, that the encounter experience is a contemporary form of an ancient mystical knowledge or gnosis, that is, knowledge that comes from the reality of visionary or revelatory states, that are also taking place in an actual "space" of the soul, or subtle vehicle. Such experiences also make it imperative that we expand our dichotomous worldview to include once again these other levels of reality, that in fact are by no means new, but recover an ancient multidimensionality.

The term nonordinary reality was used by Michael Harner to describe the shamanic state of consciousness.[12] Goodchild mentions the Sufi idea of "visionary states were thought to be 'really real'; these landscapes were called the mundus imaginalis, and were clearly distinguished from fantasy, meaning unreal, states." In a psychiatric context, Mack wrote of "Non-Ordinary States of Consciousness". [13]

"No one has been able to come up with a counter-formulation that explains what's going on," Dr. Mack said in a 1992 Globe interview in which he discussed his view of alien encounters. "But if people can't be convinced that this is real, that's OK. All I want is for people to be convinced that there's something going on here that is not explainable,” wrote Feeney concerning Mack's research.[14]

I had very little place in my mind to take this seriously. I, like most of us, were raised to believe that if we were going to discover other intelligence, we'd do it through radio waves or through signals or something of that kind.

.... I've now worked with over a hundred experiencers intensively. Which involves an initial two-hour or so screening interview before I do anything else. And in case after case after case, I've been impressed with the consistency of the story, the sincerity with which people tell their stories, the power of feelings connected with this, the self-doubt—all the appropriate responses that these people have to their experiences.[15]

As Harner described the imagery of the shamanic state as present in South American, Oceanic and other cultures unlikely to have had contact, Mack said "I have been looking at this phenomenon as it manifests in indigenous people, in Native Americans—the Cherokee, the Hopi, who know these beings as the star people. We've looked at this in South Africa, particularly in interviewing in depth a leading South African sangoma, or medicine man, who calls these beings mandingdas"

He was born to Edward C. Mack and Ruth Prince Mack and died September 27, 2004, while attending a conference about T.E. Lawrence in England. He was married to Sally Stahl Mack but their marriage ended in divorce in 1995.