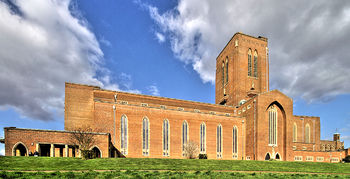 Guildford Cathedral in Surrey is part of the 500-square-mile Diocese of Guildford.[1] The cathedral was consecrated in 1961,[2] 25 years after construction started in 1936. It cathedral stands on Stag Hill, about half a mile from the centre of Guildford. In 1927 it was decided to build a cathedral in the town due to the increasing population, and five years later Sir Edward Maufe was chosen as the architect. It was designed in a Curvilinear Gothic style, and The Buildings of England noted that "The outside looks as though it will never be more than a well-mannered postscript to the Gothic Revival", however the interior was considered "very impressive and sober".[3]