See also: Talk:Gertrude_Stein#Goals of this article 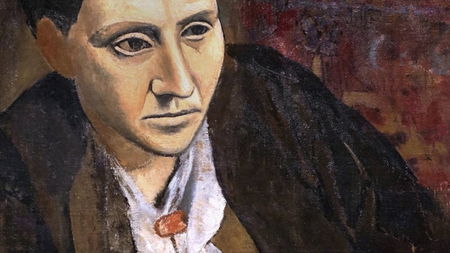 Gertrude Stein (1874 - 1946) was an American author who lived in Paris, France, and is best remembered for hob-nobbing with several famous writers and artists while living in Paris, and for creating deliberate linguistic conundrums. Anyone wanting to know about Gertrude Stein's childhood, education, or what she liked for dinner, is welcome to hop over to Wikipedia and find it out there. They'll also have a list of the famous writers and artists who attended her salon, and fill you in on her personal life, including her sexual orientation (as if that has anything to do with anything literary). But I focus here on the widespread difficulty people have in reading Stein: they simply don't know what to make of what she wrote. This phenomenon is so strong that even English literature majors in college have often never been required to read a single work by Stein. It seems that Stein is a much talked about and seldom read writer.

Stein's most famous work was a best seller published in 1933, The Autobiography of Alice B. Toklas, and it shows early traces of the kind of confounding language that has caused Gertrude Stein to be remembered nearly a century later.

Stein's least famous work was published posthumously in 1947 and was entitled Four in America[1]. As of 2020, Four in America is out of print, has never been digitized, and is likely to be found in only two or three libraries in the United States[2]. Even used copies via the internet are difficult to come by. The book consisted of four sections, purporting to be about “Wilbur Wright”, "Grant", “Henry James” and “George Washington”.

Four in America is now noteworthy because a single sentence of it has been widely misquoted and misinterpreted multiple times on the internet, all without any reference to its actual source. Internet quotes claim that Stein said she "admired Ulysses S. Grant". Others claim that Stein said she could not “think of Grant without weeping”. The actual sentence Stein wrote is to be found in the quarter of Four in America allegedly about Grant, on its last page, and the sentence reads: “I cannot think of Ulysses Simpson Grant without tears.” But do not be deceived; this sentence perches atop one of the most abstruse, dense, and discouraging paragraphs ever written in the English language: 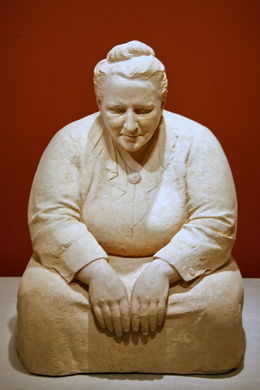 Jo Davidson's life-size terra cotta sculpture of Gertrude Stein created in Paris in 1923, now in the Smithsonian National Portrait Gallery. A bronze cast of this sculture was made in 1991 for Bryant Park, Manhattan, New York City. Stein promoted the art of Picasso and Matisse. "There was an eternal quality about her," sculptor Jo Davidson wrote. "She somehow symbolized wisdom." He depicted her here as "a sort of modern Buddha."

To make any sense of the paragraph quoted above, it is helpful to resort to Four in America's 26-page introduction by Thornton Wilder, in which he provides an explanation for Stein’s mangled, rebellious and challenging use of language. Per Wilder, Stein believed that we are now living in “end times” where language has become superficial in effect, and normal use of language does not reach the real person inside each of us. Thus (surmises Wilder), Stein tried a variety of unorthodox mechanisms to cut through our mental fog, to make us sit up and think differently, to jar us out of complacency, to challenge what we really know. Possibly, to want to read this book, wrote Wilder, requires a kind spiritual readiness.

Besides the realization that anyone claiming truly to know what Gertrude Stein thought of Grant would be stretching the truth substantially, readers can benefit by innoculating themselves against quotes thrown around glibly on the internet without an actual reference to the specific source.