Difference between revisions of "Fixed-wing aircraft" 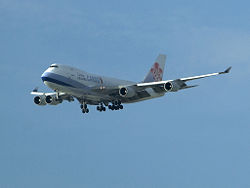 The Boeing 747 is one of the largest fixed-wing aircraft ever built.

Fixed-wing aircraft are vehicles that remain aloft using the aerodynamic lift from the flow of air over wings which are fixed in position, in relation to the rest of their structure. Some or all of the vehicle is shaped as an airfoil.

When powered they are called airplanes (American) or aeroplanes (British). Powered aircraft may use rotating airfoils perpendicular to the direction of flight (i.e., propellers), or can use hot gases that go out a nozzle 180 degrees from the direction of flight, causing the aircaft to move forward in reaction to the action of the gases. Reaction propulsion is always generated by a jet engine or rocket engine, while propellers may be spun by a specialized jet engine called a turboprop, or by a reciprocating engine.

When unpowered, they are called gliders.