natural operations such as addition and multiplication? As it happens, we can define mathematical operations for these "complex numbers" in a consistent and sensible way and, perhaps more importantly, using complex numbers provides mathematicians, physicists, and engineers with an extremely powerful approach to expressing parts of these sciences in a convenient and natural way.

A common complaint among math students is why they must bother with complex numbers when real numbers almost always seem sufficient for applications. Indeed, many familiar real world quantities, such as distance, temperature, and time are best described using real numbers. In contrast, although there are many physical situations which are mostly aptly described with complex numbers, most of these situations require some relatively sophisticated knowledge of physics, and the phenomena which they describe are more abstruse than distance, temperature, or time.

The need for complex numbers might have appeared for the first time during the sixteenth century, when Italian mathematicians like Scipione del Ferro, Niccolò Fontana Tartaglia, Gerolamo Cardano and Rafael Bombelli tried to solve cubic equations. Even for equations with three real solutions, the method they used sometimes required calculations with numbers whose squares are negative. A historical example of this can be found on the "advanced" subpage for this article.

In modernity, complex numbers form the basis for the mathematical models of many physical phenomena, including electro-magnetism and quantum mechanics. Even so, it is still often difficult to find examples where an equivalent mathematical model cannot be formulated using pairs of real numbers instead.

the imaginary part. The complex number

, so, provided that c and d are not simultaneously zero,

Another way to establish this identity is to note that 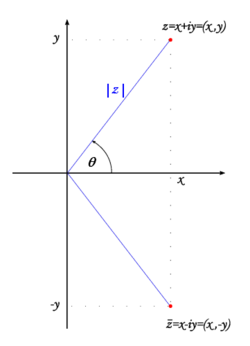 -axis, and is called the argument satisfying the condition

. Now, when complex numbers are written in polar form, multiplication is very interesting 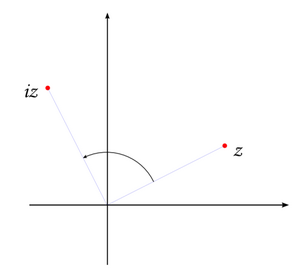 (that is, 90 degrees). Translation corresponds to complex addition, scaling to multiplication by a real number, and rotation to multiplication by a complex number of unit modulus. The one type of coordinate transformation that is missing from this list is reflection. On the other hand, there is an arithmetic operation we have not considered, and that is division. Recall that for non-zero

Division of a complex number

by a non-zero complex number

can then be interpreted as multiplication of

. This in turn corresponds to scaling of the modulus of

by the inverse of the modulus of

are the arguments of

Returning to the representation of complex numbers in rectangular form, we note that complex conjugation is just the transformation (or map)

but this identity does not hold for negative real numbers, whose square roots are not real, because the square root symbol denotes only the positive solution to

Addition and multiplication of such pairs can be defined as follows:

, the symbol we've been using, as the pair (0,1). In this way we have a way of indicating which one we mean of the two solutions of the equation

is a maximal ideal.[7] Therefore, the quotient ring