This article is about Circle (mathematics). For other uses of the term Circle , please see Circle (disambiguation). 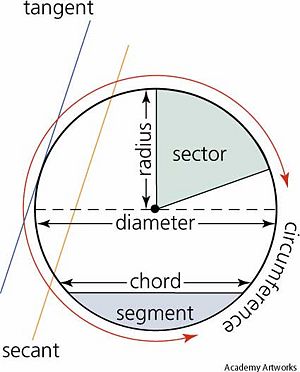 Image of a circle showing the key labels

A circle is a curve, consisting of those points in a plane that are a given distance away from a single point, the centre. The term may also refer to similarly defined curves on other two-dimensional manifolds.

The circle has been of incredible interest to mathematicians since mathematics' foundation. The circle serves as the starting point for much of mathematics, for example π was first encountered as the ratio of a circle's diameter to its circumference.

The circle also serves as the starting point for the trigonometric functions sine, cosine and tangent. The functions are derived from the unit circle. As shown below, at any point on the circle's circumference the x-coordinate is given by

, the y-coordinate is given by

and the gradient of the radius from the centre (0,0) to the point (x,y) is given by

is the angle between the radius and the x-axis. 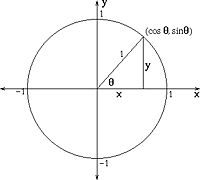 (CC) Image: Donal O'Hara
The relation of the sine and cosine and the unit circle.

The circle is also one of the 4 conic sections. It is represented algebraically as

where the circle's centre is the point (a,b) and it has radius r.

; in this case the circle would have centre a and radius r.

A given circle of radius r has diameter 2r, circumference 2πr, and area πr2.