Difference between revisions of "Church of Norway" 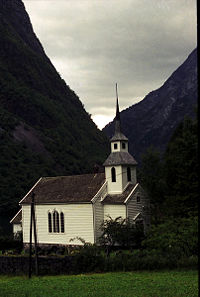 The Church of Norway is the state church of Norway. It has belonged to the Evangelical Lutheran branch of the Christian church since the sixteenth century. Approximately 83% of a population of 4.55 million are members of the church.

The Norwegian constitution defines that "the evangelical-Lutheran religion remains the public religion of the State." The King is the constitutional head of the Church, and he is required to be Lutheran. The King's position is mostly ceremonial, and the administration of the Church is managed by the Ministry of Culture and Church Affairs. The Council of State (i.e. the King and seven ministers) is responsible for appointing bishops.

The National Council, the synods executive body, is convened five times a year and comprises 15 members, of which 10 are lay members, four are clergy, and one is a bishop. It prepares matters for decision-making elsewhere and puts into effect those decisions. The National Council also has working and ad hoc groups as part of its mandate, including those addressing issues such as church service, education, youth issues, etc. The Council on Ecumenical and International Relations is the executive in international and ecumenical matters and the Sami Church Council is responsible for the Church of Norway work among Norways indigiounes three main sami peoples.

The Bishops' Conference convenes three times a year and consists of the eleven bishops in the church. It is a deliberative body that issues opinions on various issues related to church life, theological issues, etc.

The church also convenes committees and councils both at the national, diocese, and local levels, addressing specific issues to education, ecumenical matters, the Sami minority, and youth.

Christianity came to Norway in the ninth century, brought by missionaries from Britain and Germany. Norway was Christianized partly by force, and the victory and death of King Olav Haraldsson at the Battle of Stiklestad (1030) united most of Norway under the Christian faith. The Nordic churches were initially subordinate to the archbishop of Bremen, until a Nordic archdiocese of Lund was established in 1103. The separate Norwegian archdiocese of Nidaros (in today's Trondheim) was created in 1152, and by the end of the 1100s covered all of Norway, parts of present Sweden, Iceland, Greenland, the Isle of Man, the Orkney Islands, the Shetland Islands, the Faroe Islands, and the Hebrides.

Denmark-Norway became protestant during the reformation in 1537, when King Christian III introduced the Lutheran confession. Monastic orders were suppressed, and the crown took over church property, while some redundant churches were destroyed or abandoned. The archdiocese was abolished, and bishops (initially called superintendents) were appointed by the king. After the introduction of absolutism in 1660, all clerics were civil servant appointed by the King.