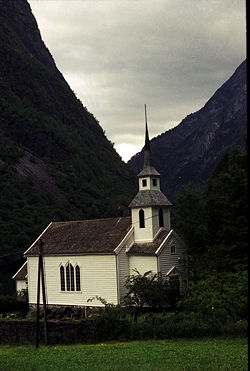 (GNU) Photo: Leif Knutsen
A country church in typical style. Sogn, Norway.
This article is about Church (building). For other uses of the term Church, please see Church (disambiguation).

In most Christian denominations, the physical house of worship is usually called a church[1]. (The term is also used for Christian religious bodies, and a few non-Christian ones.)

There is no prescribed rule for the architecture of a church building, they may be simple huts or ornate cathedrals in any architectural style. Gothic and neo-gothic styles are common. Churches are often marked with a cross on the ? of the roof; the style of the cross sometimes give a clue as to the denomination.

Where churches are large enough to have divided areas, these are the chancel, which houses the altar and is where the ministers officiate, and the nave, where the congregation sit or stand.

Other parts of churches are: 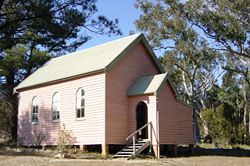 Attachments and outbuildings in a church may include: