Since its inception (Nov. 2006) and official launch (March 28, 2007), Citizendium has grown. This page provides statistics on Citizendium's output of articles and its contributor base.[1] Our meta-discussions take place on the forum, the relevant statistics page is here.

Number of articles and pages

The first graph shows the number of articles (technically speaking, all pages from mainspace, without redirects and subpages), including articles that are not "live."[2] 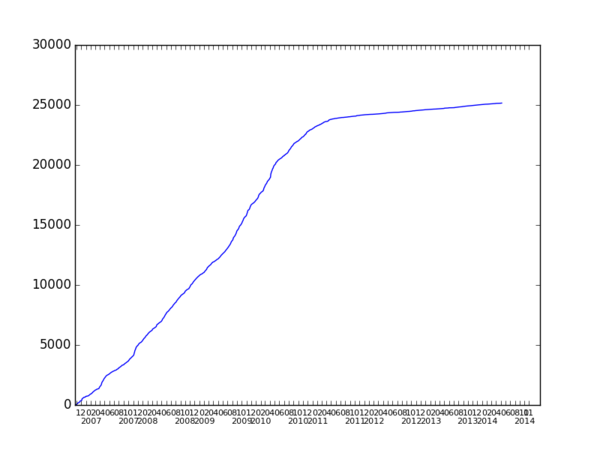 The second graph shows number of all pages from all namespaces (e.g. userpages, talk pages and images are included, redirects are not). This is the green line. The blue line is the one from the first graph (i.e. the mainspace pages). What made the greeen line jump almost vertically mid February 2007? It was Saint Valentine's, when after slashdotting many new users registered and were welcomed on their talk pages. Notice that at the same time there was no parallel growth in the mainspace. Apparently, the newly registered users were mainly watching, since at that time there was no unregistered access. A more stable growth rate has been established after the launch. 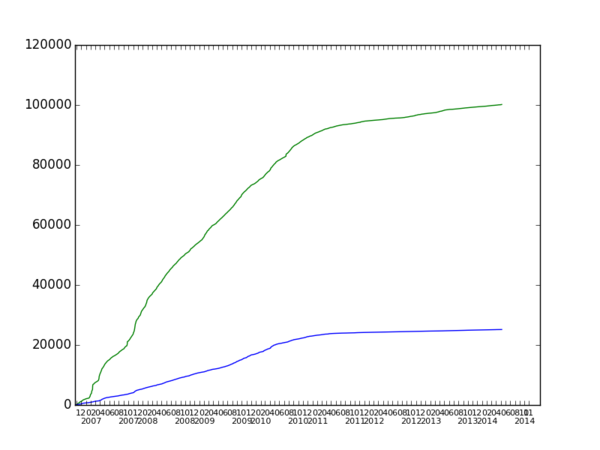 Fig. 2. Number of all pages from all namespaces (green) and articles (blue).

Rate of article and page creation

The third and fourth figure present global creation rate. It measures the activity on the wiki expressed in new pages per day. The rate for "pure" articles (technically: mainspace without redirects) is depicted in blue; the green line corresponds to all pages (still, without redirects). This is calculated as the number of articles (pages, respectively) divided by the number of working days from the beginning. Obviously, this is a "global average", to be compared with a recent creation rate on the 5th graph of this section. It represents the creation rate for articles taking into account last 30 days only. 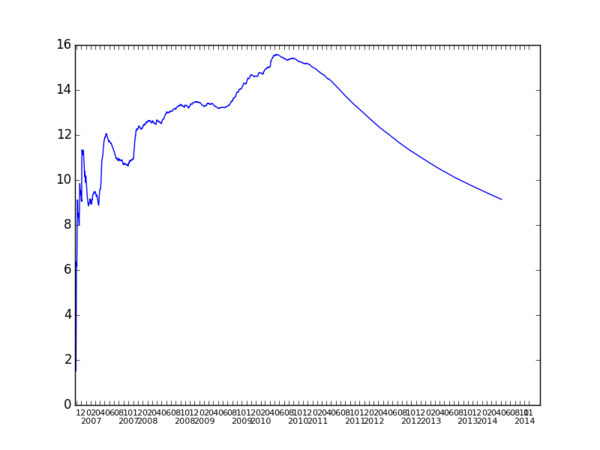 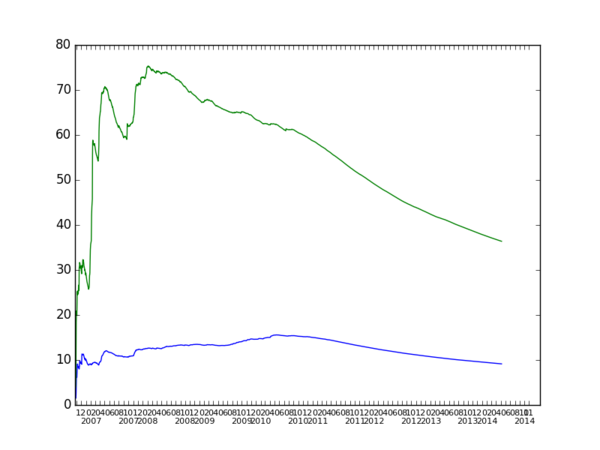 Figure 5 indicates recent creation rate. But it needs special explanation. In the earliest months of the project, the Citizendium was a "fork" of Wikipedia, i.e., we had uploaded all Wikipedia articles. Then, in mid-January 2007, the project's participants decided to "unfork," that is to delete all articles that were not tagged "live" i.e. improved or meant to be improved soon here on CZ. If an article appears to be created before that moment it means that it survived the "Big Unfork" procedure and the 'creation' date is in fact that of its first revision on CZ. In other words, the growing rate before mid-January is not very meaningful as the rules then were different and putting a tag or just correcting a typo 'created' an article. In the mid-January the article creation statistic plummeted to four articles per day--which was probably a better indicator of the rate at which we were creating our own new content.

There was a spike in February 2007 because of a self-registration period and then again in April-May 2007 because of our public launch and the accompanying publicity. There was a spike in November 2007 for three reasons: a press release, a "Stub Week" initiative, and (especially) a very broadly-distributed call for participation made to persons with unused Citizendium accounts. December 2007 experienced a relative lull no doubt largely on account of the holidays. 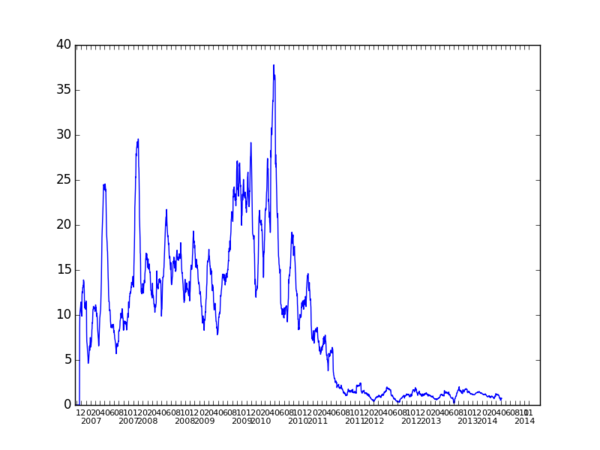 The number of edits is highly variable from one day to another. More meaningful is the 30 days moving average[3] depicted below. Trends are easily visible. The price for readability is a little shift from the actual events: the changes on graph appear a few days after it happened. For example the impact of the launch that occurred in March 2007 can be observed here a bit later. The graph takes into account edits in all namespaces. 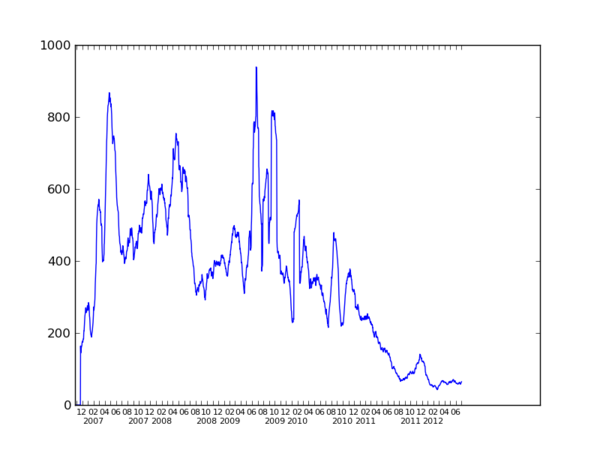 The following graphs describe the CZ human resources. These graphs need clarification, because in the months leading up to February 2006, all new authors had to create their own bios, and many new people did that and then nothing else. The Jan.-Feb. 2006 spike is due to a two-week period in which we allowed self-registration. There was also a spike that lasted from the end of March through May 2006, which corresponded to our public launch and the PR blitz that followed. The numbers from June 2006 on are perhaps a better indicator of long-term personnel trends on the wiki. 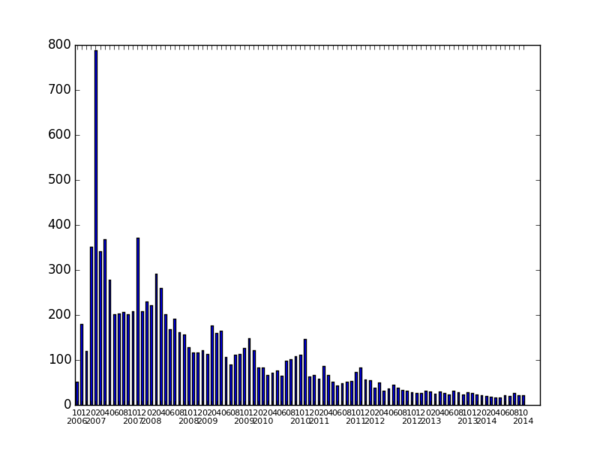 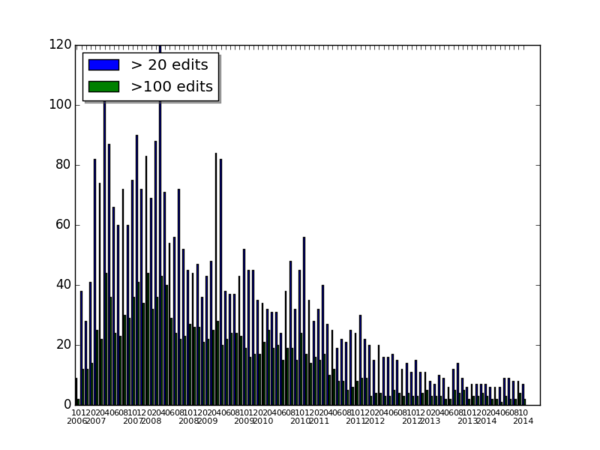 How many contributors could you meet here daily, on average? While correlated with other human resources measures, this one seems to be interesting since it shows how many people make the community on a daily basis. See the figure below. 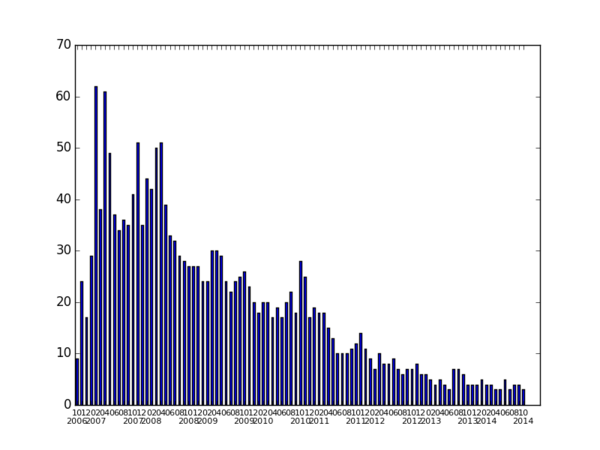 Fig. 9: How many new authors arrive each month? This can be measured by counting new user pages. More substantial metric would be, however, to detect a new user on his first edit. Notice that in the period of self-registration (essentially, one week in January and two weeks in February 2007) the two metric largely coincide, as the new users were supposed to provide their bio. There was also a spike in March, which continued into April, due to our launch. New arrivals have been almost exclusively the result of press coverage, of which there has been relatively little over the summer, since our public launch. There were also fewer arrivals in the summer, probably due to the lower amount of academic activity generally. 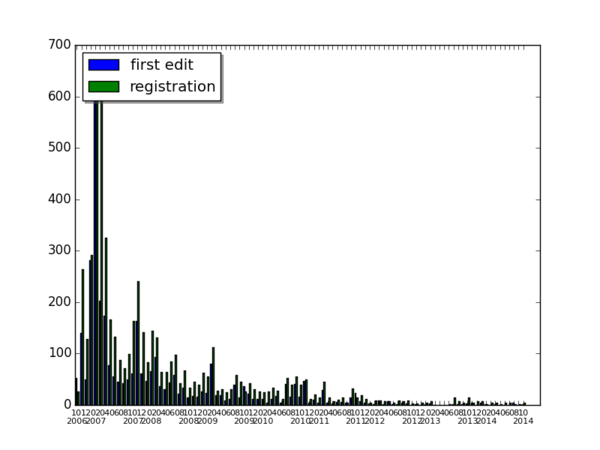 The table below is based on database dumps made about the end of every month. The following example explains its content.

As of end of July, 2007, Citizendium contained about 4100K words in its articles. We do not count the tables, nor "infoboxes". Technical information, as e.g. categories or http links are not counted. Draft pages are excluded. A typical article was about 562 words long. In fact, this is the median size, which means that, at the time, half of our articles were longer. There were about 3170 clusters.

A cluster means here the main article with a set of subpages describing given subject (this is the basic unit of Citizendium). The difference between the numbers shown here and the 17,334 total articles displayed on the Welcome Page is that the latter count includes neither external articles nor articles without metadata (which are typically lemma articles, i.e. containing just a short definition or description of the subject). Note also that for computing the median size only the main (or base) page of each cluster (without any subpages) is taken into account.

Structure of articles and workgroups

Recall that we categorize the articles as follows 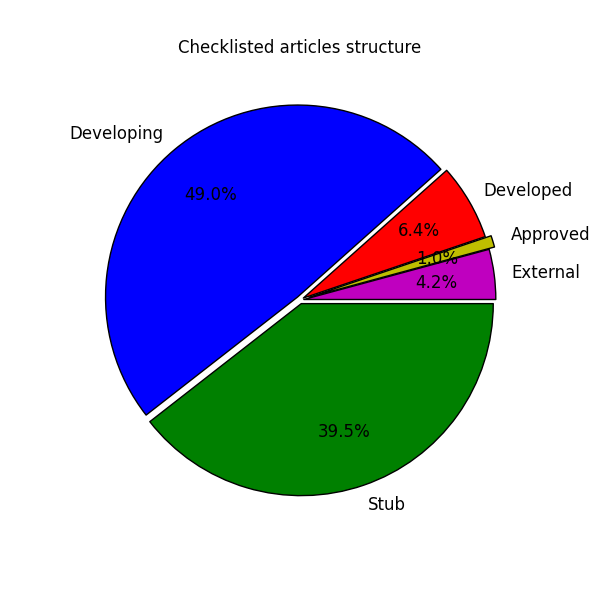 And this is, approximately, how it evolved in time. 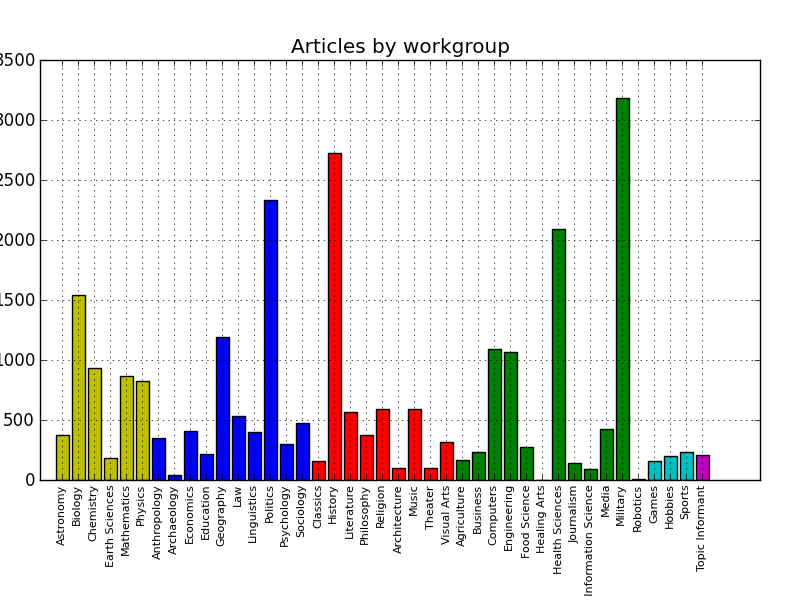 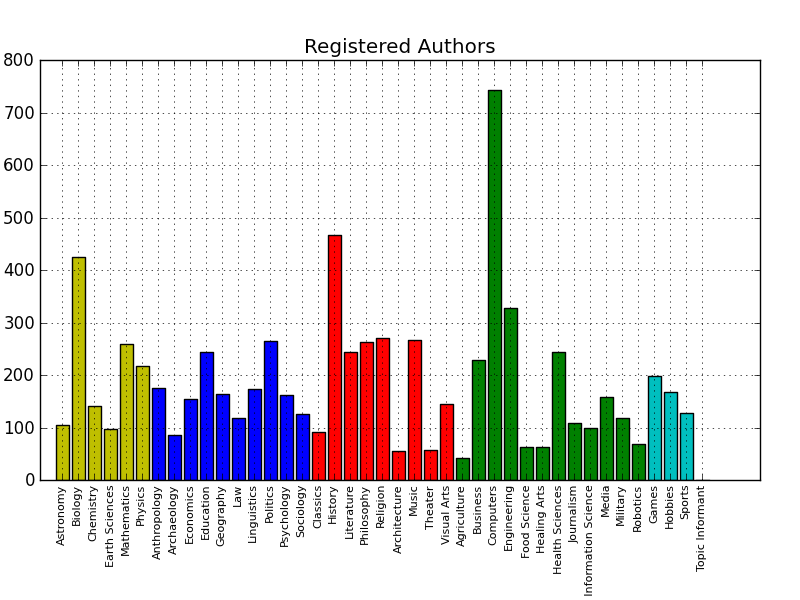 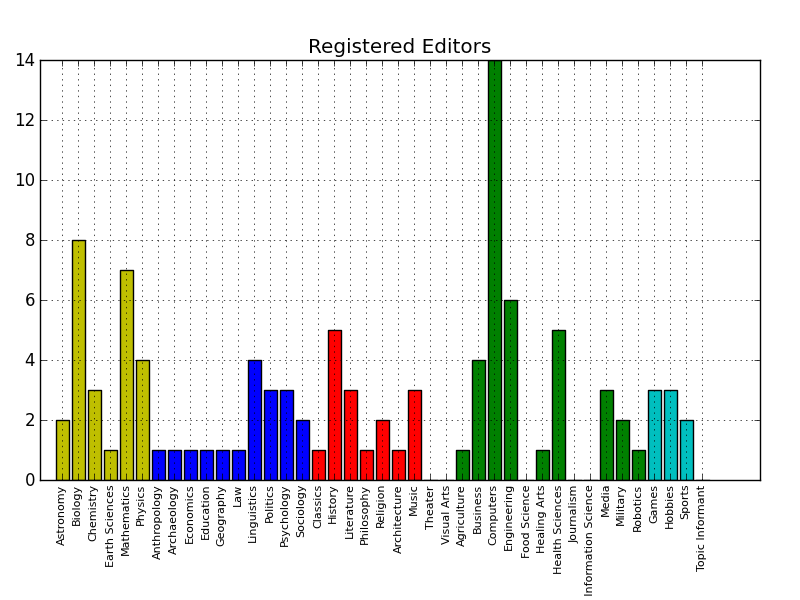 Here we graph the number of articles in various workgroups vs. time. 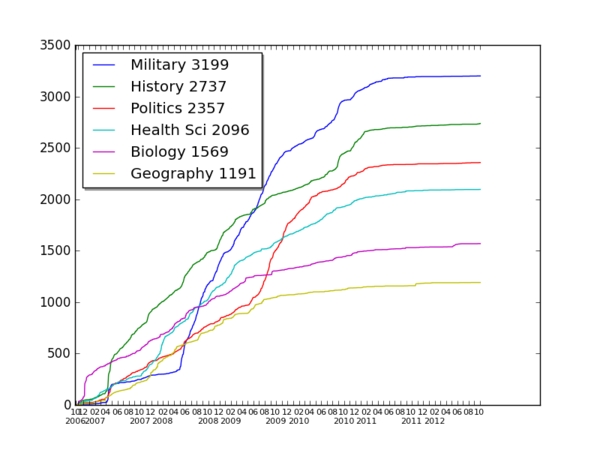 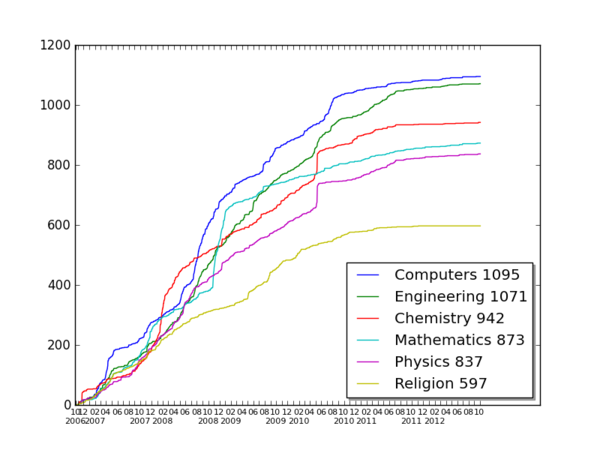 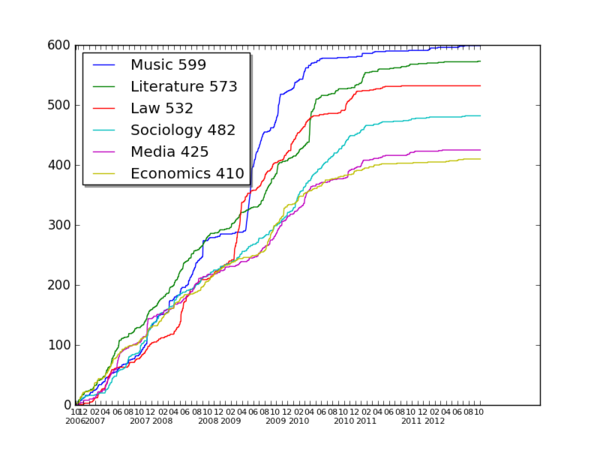 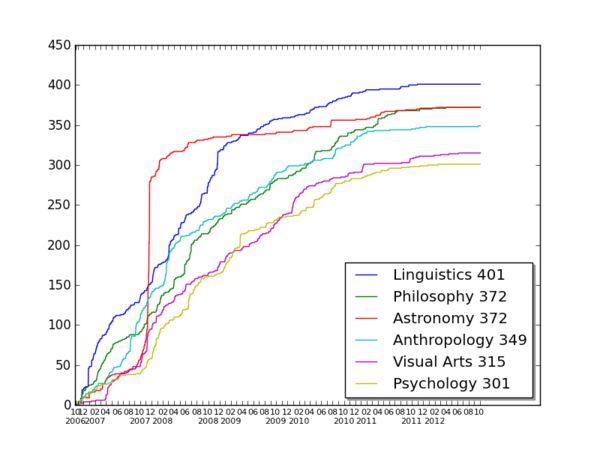 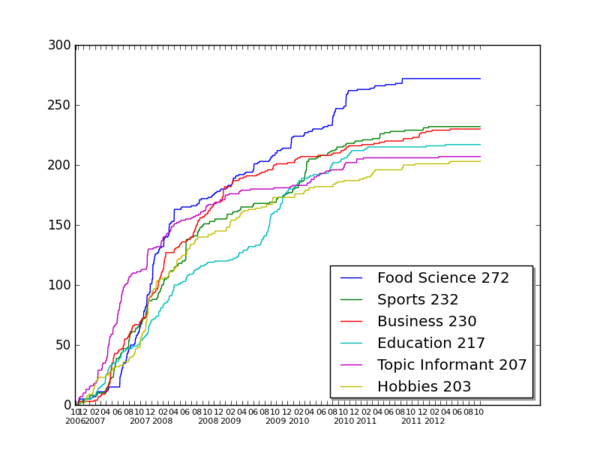 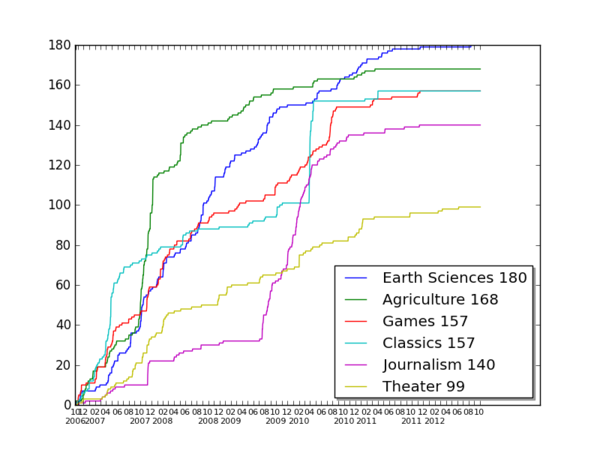 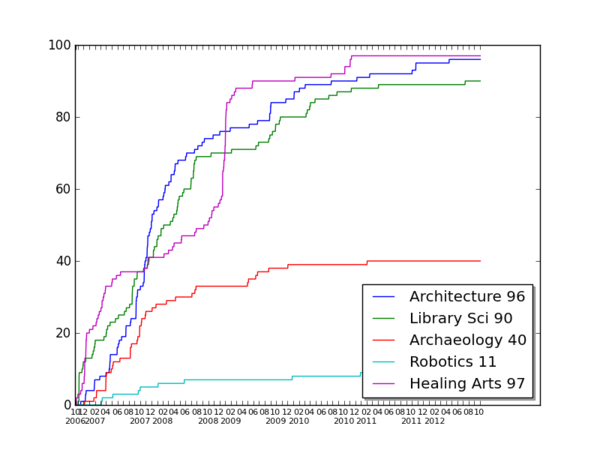