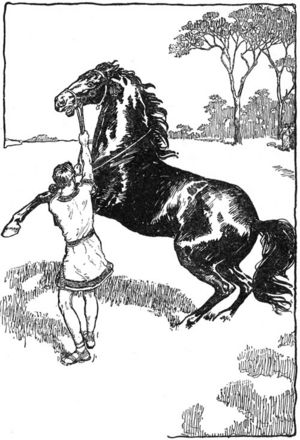 Buchephalus (Ancient Greek: Βουκεφάλας, from βούς bous, "ox" and κεφαλή kephalē, "head", thus "ox-head") was a famed horse belonging to Alexander the Great. Bucephalus died shortly after the Battle of the Hydaspes in 326 BC, and is buried in Jalalpur Sharif outside of Jhelum, Pakistan.

"Philonicus the Thessalian brought the horse Bucephalus to Philip, offering to sell him for thirteen talents; but when they went into the field to try him, they found him so very vicious and unmanageable, that he reared up when they endeavoured to mount him, and would not so much as endure the voice of any of Philip's attendants. Upon which, as they were leading him away as wholly useless and intractable, Alexander, who stood by said, "What an excellent horse do they lose for want of the experience and boldness to manage him!" Philip at first took no notice of what he said; but when he heard him repeat the same thing several times, and saw he was much vexed to see the horse sent away, he said: "Do you reproach those who are older than yourself, as if you knew more, and were better able to manage him than they?" "I could manage this horse," replied Alexander, "better than others do." "And if you do not," said Philip, "what will you forfeit for your rashness?" "I will pay," answered Alexander, "the whole price of the horse." At this the whole company fell a-laughing; and as soon as the wager was settled amongst them, he immediately ran to the horse, and taking hold of the bridle, turned him directly towards the sun, having, it seems, observed that he was disturbed at and afraid of the motion of his own shadow; then letting him go forward a little, still keeping the reins in his hands, and stroking him gently when he found him begin to grow eager and fiery, he let fall his upper garment softly, and with one nimble leap securely mounted him, and when he was seated, little by little drew in the bridle, and curbed him without either striking or spurring him. Presently, when he found him free from all rebelliousness, and only impatient to run, he let him go at full speed, inciting him now with a commanding voice, and urging him also with his heel. Philip and his friends looked on at first in silence and anxiety for the result, till seeing him turn at the end of his run, and come back rejoicing and triumphing for what he had performed, they all burst out into acclamations of applause; and his father shedding tears, it is said, for joy, kissed him as he came down from his horse, and in his transport said, "O my son, look for a kingdom equal to and worthy of thyself, for Macedonia is too little for thee."

Bucephalus as an archetypical stallion in literature and media

The story of Bucephalus is echoed in military and racing stories as theme of equestrian prowess as proof of character and daring. Typically, in these stories, the hero (or heroine) is the single person who can ride the horse, and does so to military, derby, or rodeo victory. Often the horse is actually named Bucephalus, or the legend of Bucephalus is told in the story, e.g. in Jack Whyte's The Sorcerer: Metamorphosis (2000). The warlike associations of the name have led to its also being used for a British warship, HMS Bucephalus.

Walter Farley wrote a series of novels about a fictional horse, "the Black Stallion", who is too wild and powerful to tolerate being ridden. On a ship from his Arab home through the Mediterranean, a boy befriends him. The ship sinks in a disastrous fire, the boy and stallion swim to an island, and the boy learns to ride the horse. The horse remains nearly unmanageable by others, but tame to the boy; rescued, he becomes a famous racehorse, and the boy a famous jockey. In the 1979 movie, "The Black Stallion", the boy's father tells the story of Bucephalus to him the night before the disaster.

In the 1988 movie The Adventures of Baron Munchausen, the Baron's white stallion is named Bucephalus, and on several occasions rescues the Baron from a pinch; in this way, as is typical with Münchhausen stories, the hero's exaggerated exploits have an edge of buffoonery.