Difference between revisions of "Arcuate nucleus"

The arcuate nucleus is located in the mediobasal hypothalamus at the base of the brain, it lies on either side of the third ventricle and just above the median eminence. It includes several important populations of neurons, including neuroendocrine neurones, and appetite-regulating neurones. 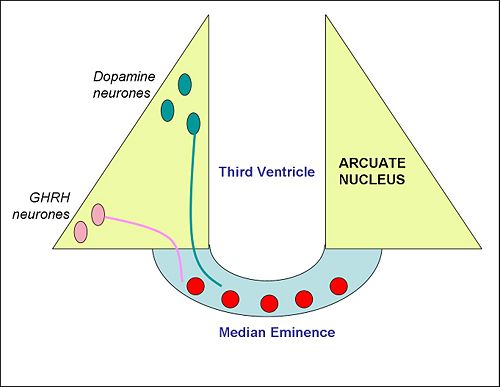 Schematic cross section of the mediobasal hypothalamus, with the median eminence at the bottom, showing the neuroendocrine neurones of the arcuate nucleus

The arcuate nucleus contains two important populations of neuroendocrine neurones with nerve endings in the median eminence. One population releases dopamine into the hypophysial portal blood to regulate the secretion of the hormone prolactin, which in turn controls the production of milk (lactogenesis). These are sometimes called the "tuberoinfundibular dopamine" (TIDA) neurons. In lactating females, TIDA neurons are inhibited by the stimulus of suckling. Dopamine released from their nerve endings at the median eminence is transported to the anterior pituitary gland, where it inhibits prolactin secretion, so, when the TIDA neurons are inhibited, prolactin secretion is increased. Dopamine neurons of the arcuate also inhibit the release of gonadotropin-releasing hormone, explaining in part why lactating (or otherwise hyperprolactinemic) women experience oligomenorrhea or amenorrhea (infrequency or absence of menses).[1]

A second population of neuroendocrine neurons, mainly in the ventrolateral part of the arcuate nucleus, make growth hormone-releasing hormone (GHRH). Like the TIDA neurons, these neurons have nerve endings in the median eminence. GHRH released into the hypophysial portal blood is transported to the anterior pituitary gland, where it stimulates the secretion of growth hormone. [2]. 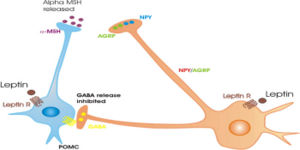 The arcuate nucleus has a key role in the regulation of feeding behaviour, through two populations of centrally projecting neurones

The arcuate nucleus contains some other neuronal cell types the function of which is still not fully known. In particular, it contains: