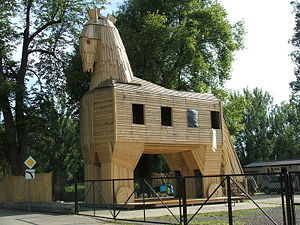 Ajax the Lesser was a Greek warrior hiding inside the Trojan horse along with Odysseus and Agamemnon; when it was wheeled inside the walls of Troy based on a deceptive and brilliant military strategy, the fighters emerged during the night from the hollow belly of the horse, opened the gates of Troy, which let in returning Greek fighters from the ships. As a result, Troy was sacked and burned in the ensuing battle which ended the decades-long Trojan War. Knowledge of the war is according to sources from Greek and Roman mythology such as Homer, who wrote the Iliad and Odyssey, as well as the Roman poet Virgil who wrote the Aeneid centuries later.