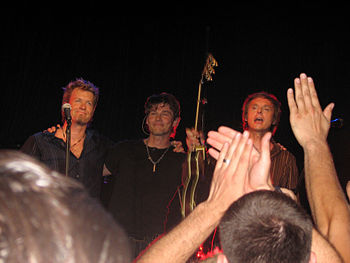 a-ha is a Norwegian pop music band formed in 1983. The band consists of Morten Harket (lead vocals), Paul Waaktaar-Savoy (guitar), and Magne Furuholmen (keyboard). a-ha got their international breakthrough in 1985 with the song "Take On Me", becoming number-one in 36 countries.

Their first album Hunting High and Low became in international bestseller, reaching second place in the U.K. hit lists and fifteenth in the United States. The music videos of the album's singles "Take on Me" and "The Sun Always Shines on T.V." became very popular, and won in two categories at the 1986 MTV Video Music Awards.

a-ha's second album was Scoundrel Days (1986). They released Stay on These Roads in 1988, East of the Sun, West of the Moon in 1990, and Memorial Beach in 1993. These albums did not sell as well as Hunting High and Low in the United States, but a-ha received some success in Australia and in the United Kingdom.

In 1987, a-ha recorded the theme song for the James Bond movie The Living Daylights.