My name is Jason Potkanski, I was Technical Director/Server Wonk/Humble code servant for Citizendium. I was compensated by Tides Center, Citizendium Foundation's incubator, for my work on Citizendium. I am still called upon from time to time when there are major technical problems but not compensated.

I was browsing the internet late one night and found the only real source for Citizendium history is Wikipedia.

Around July of 2006 I was unemployed. To pass time, I edited Wikipedia. I naively thought I could change Wikipedia politics. One of the dangerous areas of Wikipedia are Biography of Living Person articles or "BLP." You have to get these kinds of articles 100% correct or risk ruining someones life, lawsuits and worse. Wikipedia still doesn't take these articles as seriously as it should and has been burned for it.

In one of the long talk comments just as I was getting disaffected with Wikipedia, someone mentioned Sanger's announcement of Citizendium. I found it and signed up for one of the lists, eventually the forums and the rest is history.

Besides Larry, the initial technical crew consisted of myself, Greg Sabino Mullane and Peter Hitchmough. I remember Wikipedia having some database issues around this time. With Greg being a Postgresql developer, the Wikipedia scaling issues, and the need to be different - we went with the underlying database of Postgres.

I did an interview with Network Performance Daily that explains a lot of the under the hood workings of CZ.

Technically, not a lot has changed in the major configuration since then. Application upgrades and OS upgrades since, but the underlying applications are still the same.

I watched and participated in all the drama from Wikipedia Admins, Sysadmins, Editors and other players. With Citizendium, having Sysadmin power, I do not edit the wiki. Having access to the underlying database and participating in the editing and political processes are not mutually compatible. This takes a lot of will power. (I was a political science minor.)

One thing that should be duly noted about Larry his his penchant for source texts. In my field, computer science, I prefer application theory, summaries and reference manuals. Larry prefers the pure, thousand-page theory books. I wish I had that much time.

I am 29 and live near Chicago with my girlfriend Kelly, my dachshund and 2 cats. I currently work for CCIM Institute as an IT Developer. I have worked as a consultant specializing in systems integration, systems administration and analyst.

Expert: I consider myself to have a Computer Science Degree equivalent. I studied at Iowa State University and Western Illinois University. I left for personal reasons during my last semester in 2001/2002.

About Puddy: Puddy is my 5 year old techno dachshund. I use his picture for testing of image systems. His images are available into the public domain. His favorite past times are barking at garbage trucks, begging, eating, chasing the two house cats, eating, cheese, sleeping (preferably under blankets), eating vandals and acting cute. 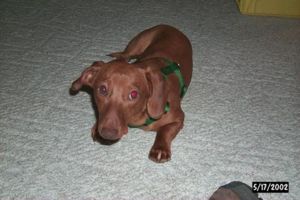