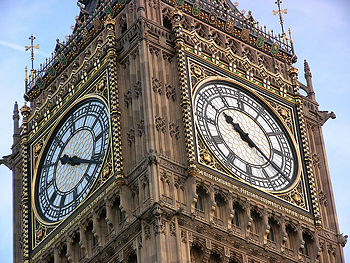 (CC) Photo: UK Parliament
The north and west faces of the Westminster clock tower. The tower is popularly known as Big Ben, though the name originally applied to the bell inside.

The clock tower of the Palace of Westminster is often referred to as Big Ben, though the name actually refers to the bell inside. It is an instantly recognised London landmark for many. The distinctive tolling of the bells is often broadcast on national television (the first broadcast of which took place on December 31, 1923) thanks to a microphone placed inside the tower which is connected to Broadcasting House. In 1848, Sir George Airey, the Astronomer Royal, and Edmund Denison (a barrister and amateur watchmaker) designed the clock, and Big Ben - the Great Bell - was first cast in 1856, although it did not last long, cracking during testing. On April 10, 1858, the second bell was cast and was first tolled in July 1859. It cracked again, but they rotated the bell.[1]

(CC) Photo: UK Parliament
The clock mechanism suffered serious damage in 1976 due to a sudden fracture of the flyfan arbor of the chiming train.[2]

The clock tower is also home to a Prison Room for MPs, although this is not currently in use. In 1880, the secularist MP Charles Bradlaugh was imprisoned in the Clock Tower for refusing to swear allegiance to the Queen.