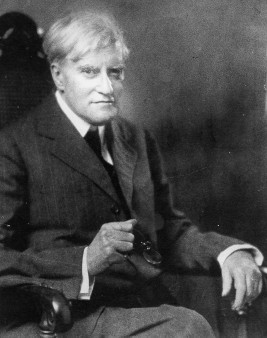 Benjamin Nathan Cardozo (1870-1938) was an American jurist who served as an Associate Justice of the Supreme Court from 1932 until his death in 1938. Cardozo was born in New York. He was nominated to the Supreme Court by President Herbert Hoover to succeed Justice Oliver Wendell Holmes, Jr.. Prior to his tenure on the Supreme Court, he was a judge on the New York Court of Appeals (1917-1932). The law school of Yeshiva University in New York is named for Justice Cardozo.

Although Cardozo achieved the highest judicial office in the land, many of his most influential opinions were penned during his service on the New York Court of Appeals. For example, in the 1917 case of Wood v. Lucy, Lady Duff-Gordon, he authored an opinion finding consideration supporting a contract based on a promotor's promise to promote an unspecified amount of sales of fashion accessories bearing the defendant's name. In the 1928 case of Meinhard v. Salmon, he found that one business partner owed another the opportunity to join in a continuation of their joint venture after the expiration of the initial partnership. In another widely cited 1928 case, Palsgraf v. Long Island Rail Road Co., he substantially advanced the theory of proximate cause, that a negligent party could not be held liable for an injury to a person outside the zone of reasonable foreseeable risk.

On the bench, Cardozo generally favored an expansive view of governmental power. When President Franklin Delano Roosevelt began to implement his New Deal programs, Cardozo, along with his colleagues Louis D. Brandeis and Harlan Fiske Stone, consistently upheld the federal government's power to regulate the economy. The three liberal justices were dubbed the "Three Musketeers" and were opposed by the conservative "Four Horsemen" who invariably voted to strike down New Deal legislations.

At the beginning the Four Horsemen prevailed and many New Deal programs were invalidated by the court. However, later with the change of views of Justice Owen Roberts (who had previously sided with the conservatives) and the elevation of Hugo Black to the court to replace the retired Willis Van Devanter, the Four Horsemen eventually lost their power and most of the New Deal legislations were implemented.

However, there were exceptions to his favorable view of federal power. In the case Schechter Poultry Corp. v. United States he concurred with the unanimous court that the National Industrial Recovery Act of 1933 was unconstitutional.

On criminal justice, Cardozo consistently sided with the law enforcement over criminal defendants. He was a virulent opponent of the proposed exclusionary rule which would render illegal evidence obtained by the police inadmissible in the court. In 1926 he famously remarked "The criminal is to go free because the constable has blundered." (People v. Defore, 242 N.Y. 13) However, the history did not follow Cardozo's view, as the exclusionary rule was extended to the state level by the Supreme Court in 1961, in the decision Mapp v. Ohio authored by Justice Tom Clark.

In 1937, Cardozo wrote the decision in Palko v. Connecticut that ruled that the Fifth Amendment protection against double jeopardy did not apply to individual states, reasoning that protection against double jeopardy was not a "fundamental right". Eventually Palko was overruled by Benton v. Maryland, an 1969 decision authored by Justice Thurgood Marshall.