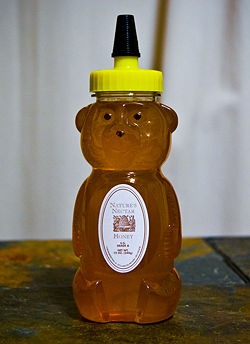 Many honey producers market their products in bear-shaped bottles that have come to be popularly known as "honeybears." One study shows that consumers do not pay significantly different prices for honey that is marketed in bear-shaped bottles as compared to other plastic containers, but also notes that some 15.5 percent of the honey sold in a sample taken in 1995 was packaged in such bottles.[1] The practice reportedly dates back to 1957, when Ralph Gamber, future president of the Dutch Gold Honey company, reasoned that "a bear likes honey, why not a bear of honey?"[2]

As with many such ideas, the origin of bear shaped honey bottles is not totally clear-cut. Edward Rachins, for example, applied for a patent on a bear-shaped bottle several years before Gamber hit upon his idea.[3] It was Gamber's company, however, that popularized the honeybear. Plastics were not yet as ubiquitous or as easily produced as they are today and the idea was a gamble but it immediately payed off;[4] honeybears quickly became a cultural icon. In the fall of 2007, Dutch Gold held a naming contest for the honeybear and the Gamber family selected "Nugget" from among the entries.[5]