William III (1650-1702), also known as William of Orange, was King of England, Scotland and Ireland (1689–1702), and Prince of Orange and Stadholder of the Netherlands.[1] As the leader of the Glorious Revolution of 1688 he replaced King James II of England, after the latter fled to France, and reigned jointly with his wife Queen Mary. Through him the parliamentary and Protestant causes achieved a permanent triumph in Britain.

He was born Prince William Henry, at The Hague on November 4, 1650, eight days after the death of his father William II, Prince of Orange, ruler of the United Provinces (the independent Netherlands).[2] His mother was Mary, daughter of Charles I of England, and he was their only child. He was raised by his mother until he entered at the University of Leiden, where he excelled in languages and field sports. Even though a Calvinist by birth and training, he was tolerant in religious matters by nature and policy. 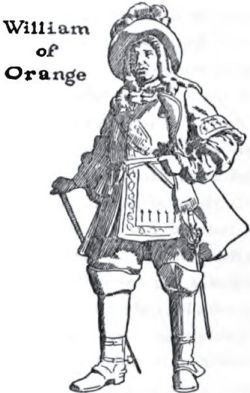 William's dynastic position was at first ambiguous because many of the Dutch, insisting on state rights, resented submission to the House of Orange; this attitude was maintained by the two De Witt brothers, who were the effective rulers of the seven federated provinces during the Prince's minority. They led an anti-Orangist constitutional revolution that abolished the posts the prince would normally have inherited. The Orange party maneuvered to put William in power, and his opportunity came in 1672. That spring the French invaded under King Louis XIV, and the people called for Orange. John De Witt had to acquiesce making William Captain General in charge of stopping the French and their English allies; within weeks he became Stadholder of the states of Holland, Zeeland, Utrecht, Overijssel, and Gelderland and, in effect, supreme ruler of the Netherlands. De Witt was lynched, murdered, and mutilated by an angry mob.

Stadholder of the Netherlands

In 1672-78 William led Dutch armies that recovered the lost provinces; he organized campaigns and sieges against the French. A good soldier, but a mediocre general, he wore down the enemy by dogged determination and refusal to accept defeat. William stopped the French advances by flooding the fields, meanwhile building and training a new army. By 1673 he had alliances with Spain and Austria and launched counterattacks on France. Naval victories forces the English to quit the war. The French, exhausted, made peace with the the treaty of Nijmegen in 1678, which William opposed but could not stop. His political fortunes were at a low ebb, with the regents in Amsterdam leading the opposition. Then a totally new opportunity opened, the throne of England.

William realized Louis XIV would continue to be a threat, so he organized a league against France. For help he turned to England, the country of his two uncles Charles II and James, Duke of York, afterward James II.

In 1677, William married the English Princess Mary, Protestant daughter of the Roman Catholic James, duke of York (later King James II). She was next in line for the English throne if the hugely unpopular Catholic King James II abdicated. William carefully avoided involvement before 1681, then became increasingly entangled. His main goal was to keep England as an ally of the Netherlands.

In 1685 James II became king of England and alarmed many leaders by his pro-Catholic policies. William let it be known he was available if invited by a very broad spectrum of English political leadership. Unrest escalated with the birth of a son to James by his wife, Mary of Modena, a Catholic, on June 10, 1688. Within a few days, an invitation, signed by seven prominent personages, was taken over to William with an assurance of military support if he effected a landing in England. William issued a "Declaration of Reasons", which achieved virtual hegemony over English political discourse.[3] With 50 men-of-war and 14,000 men William landed on November. 5, 1688, and marched on London. There was no opposition as James' army melted away and the political leadership welcomed William. James in late December he fled the country, thereby abdicating the throne. James was protected by Louis XIV and became the leader of schemes for the invasion of England with French and Jacobite help. (Jacobites were English and Scottish supporters of James and his sons.)

William insisted he would rule England as king and not merely as his wife's consort; accordingly, in February, 1689, Parliament offered the crown to William and Mary, each to have full sovereign rights. A similar offer was made by the Parliament of Scotland. The first stage of the English Revolution, with its advance toward constitutional monarchy and responsible government was complete with their coronation on Apr. 11, 1689, and their acceptance of the Bill of Rights (1689), which greatly limited the royal power and prescribed the line of succession, and gave Parliament control of finances and of the army. Parliament was now supreme.

The "Glorious Revolution" ousted James and the Catholics, but William brought in Dutch advisors and became unpopular in England. William in turn had little interest in England save as a source of supplies, and he spent nearly half the remainder of his life participating in wars abroad--first in Ireland, then in Flanders; in the years of peace after 1697 he frequently stayed in the Netherlands. He acted mainly as his own first minister and confided only in Dutchmen, especially Hans Willem Bentinck, 1st Earl of Portland (1649-1709). The earl implemented Williamite policy in Scotland, 1689-99 in an erratic fashion, but he communicating Scottish concerns to the king. Although Scotland experienced a series of political disasters in the 1690s, from the Glencoe massacre to the Darien debacle, Scottish leaders appreciated the support of Portland, the king's favorite, in dealing with Scottish affairs during a stormy decade.[4]

Until her death in December 1694, Mary acted for him in the summer months while he was campaigning abroad; thereafter William was assisted by a small cabinet council. He adhered strictly to his undertaking given in the Bill of Rights of 1689 that he would summon Parliament regularly, and he acted as a constitutional sovereign; he did however exercise his right to direct foreign policy and to choose and dismiss ministers.

His Whig ministers, most notably Charles Montagu, earl of Halifax, created the Bank of England in 1694, which proved a major weapon in future wars because it provided stable financing through the national debt. William and the Whigs were also responsible for the Toleration Act (1689), which lifted some of the disabilities imposed on Protestant nonconformists; they allowed the Licensing Act to lapse (1695), a great step toward freedom of the press. William sought to maintain royal prerogatives but was unable to prevent passage of the Triennial Act (1694), which required a new Parliament every three years, and the Act of Settlement (1701), which imposed the first statutory limitation on royal control of foreign policy.

With the consent of Parliament William declared war on Louis XIV in May 1689. The War of the League of Augsburg (also called "Nine Years' War" and "King William's War") saw battles on many fronts, including Ireland, from which James II sought to regain his throne with French help. In the war William's only important victory was the Battle of the Boyne, in Ireland on July 1, 1690; "King Billy", as his soldiers called him, decisively defeated a Catholic force led by the deposed James II. King Billy displayed courage but minimal tactical skill; James and his generals proved even less competent. The Pacification of Limerick on 13 October 1691 marked the Jacobite forces' final capitulation. The Penal Laws against Roman Catholics were increased in severity--Irishmen who refused to became Protestants were under severe restrictions regarding property, office and political rights. In Scotland, the Jacobites resisted violently, but after their defeat at Killiecrankie (1689) William was able to make Scottish Presbyterianism secure. He condoned the bloody massacre at Glencoe in 1692.

On the continent it did not go as well. William took an English army to the Spanish Netherlands in 1691 but in Flanders lost two battles to the French--Steenkirk, in August 1692, and Neerwinden or Landen, in July 1693. The Royal Navy's victory over the French fleet at La Hogue (May 1692) saved England from a French invasion.

William well knew that the Treaty of Ryswick of September 1697, which concluded the war, was at best a temporary truce. Serious trouble and perhaps war loomed regarding rival claims to the throne of the childless Charles II of Spain. In the last years of his reign, William tried to have the Spanish possessions partitioned among the claimants by means of treaties. When this failed he built up an alliance, known as the Grand Alliance of The Hague (1701), directed against Louis XIV. The death of James II that year was followed by Louis' public recognition of James' son, the "Old Pretender" as "James III," king of England and Scotland, and by other acts threatening the security of Great Britain and the Netherlands, as well as their exclusion from the Spanish colonial trade. There was also the fear that Louis' grandson Philip, the new king of Spain by Charles II's will, might one day unite the crowns of France and Spain. All this made the renewal of hostilities inevitable, but William did not live to see the outbreak of the War of the Spanish Succession in May 1702. He died in London, on March 8, 1702, after a fall from his horse. Since he had no heir he was succeeded by Queen Anne, his cousin and sister-in-law.

The English disliked William because of his lack of graces, his obvious preference for Dutch advisors, and his blatant use of the throne to support his unpopular wars on the continent. He was close to his wife Mary and she was well loved by the English, and proved an effective ruler when he was absent; but she died in 1694 and they had no children.[5] His posthumous reputation has been affected by the highly laudatory treatment by the great English historian Thomas Babington Macaulay, matched by disparagement at the hands of modern writers. But to William III, more than to any other, is due the religious and governmental character of the United Kingdom today. Because of his victory at the iconic Battle of the Boyne in 1690, some unionists and loyalists in Northern Ireland have appropriated William as a symbol of successful defence of Ireland as British territory.

See the more detailed guide at the Bibliography Subpage