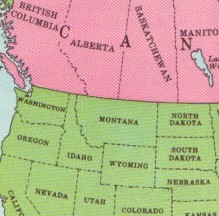 Washington is one of the states of United States of America; it was admitted to the Union as the 42nd state on November 11, 1889. It lies at the northwest corner of the contiguous part of the US, in the Pacific Northwest region. Washington is bounded by the Canadian province of British Columbia on the north, Idaho on the east, Oregon on the south, and the Pacific Ocean on the west. The state has an area of 68,139 square miles (176,479 square kilometers) and an estimated population of 6,549,224 (2008).

The capital is Olympia. Most of the people live in the metropolitan areas of Seattle and Tacoma and other cities along Puget Sound. The University of Washington in Seattle was established in 1861.