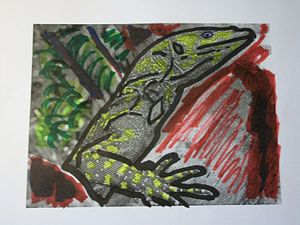 This large lizard escaped detection by biologists until recently in the northern area of Luzon in the Philippines. He has a "double penis" according to one account and loves fruit.

Varanus bitatawa is a large lizard recently discovered by scientists in the Philippines on the northern island of Luzon which can grow to six feet or 2 metres in length. It is a vegetarian and is related to the notoriously carnivorous Komodo dragon. It is "large, showy, and also slightly strange."[1] In the publication Biology Letters affiliated with the Royal Society, the existence of the relatively unknown "monitor lizard" was described by researchers Luke Welton and Rafe Brown recently of the University of Kansas,[1] although it was known to local hunters in the Philippines, particularly among tribes such as the Agta and Ilongot who refer to it as Butikaw. It wanders primarily in an area of northern Luzon known as the Sierra Madre Forest. It has bright colors[2] and gold colored flecks, and a body which is scaly with segments of black and green colors. It has curved claws to facilitate climbing.

Males have a hemipene instead of a penis like all lizards. The male reproductive organ is inverted inside its body like a "sock turned inside out"; during sexual intercourse, the organ is everted and flipped out of the body in which it fills with liquid "so they can rigidly protrude for reproduction", according to biologist and herpetologist Rafe Brown. Brown added, "They have elaborate structures that we assume are unique to each species - we think they have to fit like a lock and key, preventing hybridization between species." One report describes the sexual organ as a "double penis."[3] It is likely that coloration helps males and females identify each other for reproduction and mating; Brown said "Bright coloration often helps reptiles find and attract mates." Both males and females have golden stripes and reptiles are very visual.[2]

The Agta and Ilingot tribal people hunt the animal for its meat. It loves to eat fruit, particularly palm-like fruits from the Pandanus trees. It is an excellent climber of trees. But much of the animal's range is not known. It is separated by three river valleys or about a ninety mile stretch from a similar species named Varanus olivaceus or Gray's monitor lizard. Adults weigh about 22 pounds. It is believed not to be venomous or poisonous or dangerous to humans.[2][3]

DNA analysis has been done, suggesting that a close relative genetically is a species called Varanus olivaceus, although there is speculation that the DNA of both species is substantially different.[2]

What's particularly amazing is how the large lizard escaped the attention of biologists for a period of about 150 years. The animal is largely secretive and dislikes "traversing open areas" according to one report.[2] In 2005, biologists had two smaller specimens but didn't have genetic samples. It is an important part of the ecological environment of the forest area since, during its digestion of seeds from the Pandanus tree, it removes the seeds' coatings which enable them to germinate more rapidly, thus "promoting forest growth". Therefore, the animal promotes forest conservation. It's a "Philippine national treasure", according to biologist Rafe Brown.[2]

It's possible that the Sierra Madre area of Luzon is a treasure trove of "undescribed vertebrate biodiversity" according to Brown, even though much of the area is heavily populated and deforested.[3] Brown said:

We suspect that many, perhaps dozens of new species of small vertebrates––reptiles, amphibians, and possibly birds and mammals--may await discovery in the forests of the northern Philippines.[3]