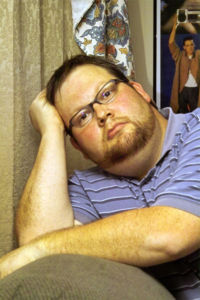 W. Guy Finley
W. Guy Finley likes to call himself a "frustrated" academic. He graduated from high school in Round Lake, IL and then attended the University of Southern California in Los Angeles, CA where he was appointed to Alpha Lambda Delta, a highly active member of the Spirit of Troy, and wrote for the Daily Trojan. After two years a lack of funds forced him to abandon his studies. Enter work to repay school debts, marriage, and a son and it appears he has gone on indefinite hiatus from his formal studies.

Professionally he is a field appraiser for a major auto insurance company and as such has much knowledge about automobiles, motorcycles, recreational vehicles, and small watercraft. He was also the parts manager of a motorcycle dealership for a short time and is a part-time disc jockey.

He is a member of the Round Lake Area Schools Board of Education where was elected from 2001-2003 and appointed again in 2006. He refereed soccer with the American Youth Soccer Organization for ten years attaining the level of section referee, intermediate instructor and assessor.

Politically he was a Libertarian and state chairman of the Libertarian Party of Illinois but has since rejoined the Republican Party and considers himself a neolibertarian.

On Wikipedia he was an active contributor, admin and advocate and looks forward to the CZ project as a much less frustrating way to contribute to human knowledge.