This is a draft in User space, not yet ready to go to Citizendium's main space, and not meant to be cited. The {{subpages}} template is designed to be used within article clusters and their related pages.
It will not function on User pages. 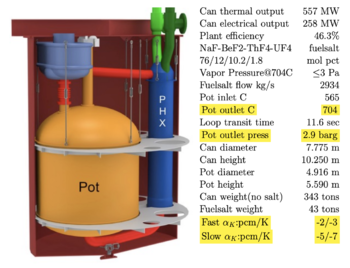 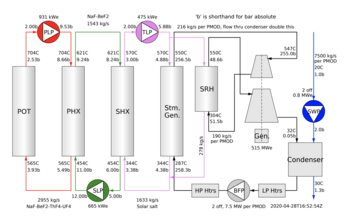 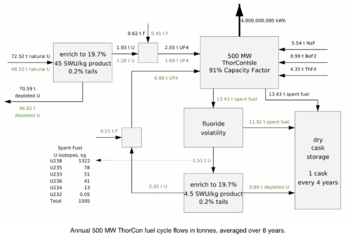 (CC) Image: ThorCon USA Inc
Raw material flows and waste at a ThorCon fuel processing plant. Enriched uranium powers the cycle, but most of the energy comes from the more abundant thorium.[3]

Thorcon nuclear reactors are molten salt reactors with a graphite moderator. These reactors (and the entire power plant) are to be manufactured on an assembly line in a shipyard, and delivered via barge to any ocean or major waterway shoreline. The reactors will be delivered as a sealed unit and never opened on site. All reactor maintenance and fuel processing will be done at a secure location.

This article provides brief answers to the questions raised in Nuclear power reconsidered. For more details see the ThorCon documents[4] and ThorCon's Status Report to the IAEA.[5]

Accidental overheating. There are salt plugs at the bottom of the reactor vessel that melt if the reactor gets too hot, and allow the fuel to flow out of the reactor into drain tanks, where the fission reaction stops, and the decay heat is absorbed by a "cold wall".[6] There are no safety-critical systems or valves and no electronic or computer systems vulnerable to cyber attack.[7] No operator action is required, and there is nothing an operator can do to stop a safe shutdown. Reactors that meet these requirements are called "walk-away safe".

Leakage of Radioactivity The molten salt is at low pressure, and any leakage from the reactor will quickly solidify. The most troublesome fission products, including iodine-131, strontium-90 and cesium-137, are chemically bound to the salt. There is no pressurized water near the reactor vessel. Leakage to the environment is blocked by three gas-tight barriers - the Can, the Silo, and the Hull.[8] Tritium is captured by getters in inert gas in the power module hall and in the secondary heat exchanger cell. A third salt loop allows any tritium penetrating both heat exchangers to be captured in the third loop.[7] Xenon and krypton bubble out in the header tank, are held in storage tanks until they have decayed to harmless levels, and then cooled, compressed and stored.[9]

Sabotage The hull is a 10ft thick wall of sand with an inch of steel on each side, capable of blocking a jumbo jet with nine-ton engines.[7] Reactivity can be increased only by adding fuel slowly through an orifice inside the silo, out of reach of any rogue operator. The maximum rate of increase in reactivity is enough for load following, but never enough that the reactor can go prompt critical.[7] Should a group of terrorists seize control of the plant and attempt to remove fuelsalt, they would require use of the 500-ton deck crane, which could be easily disabled with small artillery.[10] There is no vulnerability to cyber attack.

The "waste" in the ThorCon fuel cycle is actually valuable fuel for future fast neutron reactors capable of efficiently burning thorium and depleted uranium. This will extend proven resources from centuries to millennia.

The reactors are delivered as sealed cans and never opened on site. All reactor maintenance and fuel processing is done at a central secure location.

There is no online chemical processing to remove fission products or anything else, and no highly enriched material anywhere — none above 20% U-235.

The sealed cans are inside a high-radiation silo under a heavy concrete lid. Any attempt to get inside the silo can be detected by sensors and security cameras and stopped by local police or military.

Uranium is always low-enriched. Plutonium is always diluted with thorium, in fuel salt with hazardous fission products.[7] Making bombs from this material will be far more difficult than starting from uranium ore. 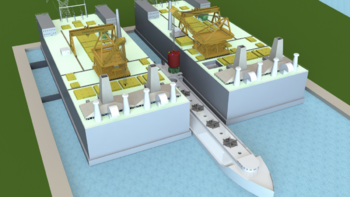 (CC) Image: ThorCon
Two 500GW ThorCons and a can ship.

ThorCon claims that their 500MW plant will generate reliable electric power cheaper than coal, competitive with natural gas, cheaper than LNG, and cheaper than storage-buffered wind and solar.[12] This low cost is achieved by building the entire plant on an assembly line in a shipyard, and using standard parts available from many suppliers at competitive prices. Everything except the structure itself is replaceable. After four years of operation and four years of cooling, the sealed reactor can with the entire primary loop is returned to a centralized recycling facility, decontaminated, disassembled, inspected, and refurbished. Incipient problems are caught before they can turn into casualties. Thorcon plants with replaceable sealed reactors are expected to operate for 80 years; but if a ThorCon is decommissioned, the process is little more than pulling out but not replacing all the replaceable parts.[13]

The main challenge in designing a low-cost molten salt reactor is the lifetime of components exposed to high temperature and high levels of neutron irradiation. Expensive steels were used in early reactor experiments [14] to resist corrosion by the flowing molten salt. ThorCon uses standard steels.[15] Components with thin steel, like the heat exchangers, can be replaced. The reactor vessel and anything with thicker steel can be reused. At end-of-life, the slightly radioactive steel can be melted down and recycled for new reactors.[16]

Lifetime of the reactor is actually limited more by the graphite moderator than by degradation of the steel. ThorCon’s graphite needs are similar to those of an HTGR (High Temperature Gas-cooled Reactor). Life expectancy is 4 years at 680C and total irradiation 3e22 n/cm2 by high-energy neutrons.[17] The steel and graphite for the reactors add a little more than 50 million dollars to the cost of a 500 MW plant.[15]

old Wikipedia text
ThorCon proposed to use modular shipbuilding production processes in a shipyard to build each ThorCon as a completed power station. The ThorCon would then be floated and towed on the ocean to the installation site, where the walls would be filled with concrete or sand as ballast and shielding. Notably, the setup of rebar is not required in this process as steel plate construction provides the concrete reinforcement and is integral to the hull design.

The power plant consists of a nuclear fission section and a steam/electrical section. The fission section of the plant consists of two power modules, each with two siloed reactor units of which only one is active at any time. The operational reactor units each generate 557 MW (thermal), yielding 250 MW (electric).[18] This means the overall plant with two active reactors can yield 500 MW (electric). Each reactor unit operates for four years, cools for four years, and is then replaced. Such retired reactors use passive cooling to remove decay heat until they are cool enough to be replaced. Any fuel recycling would occur offsite.

The reactors operate at near-ambient pressure, reducing steel requirements by 50% and concrete requirements by 80% versus a conventional nuclear plant. Little of the concrete must be reinforced.[19] In the event of a reactor overheating, thermal expansion of the salt stops the fission reaction and if necessary triggers freeze valves to drain the reactor and separate the fuel from the moderator. Hazardous fission products iodine-131, cesium-137 and strontium-90 are chemically bound in the reactor salt, preventing their release.

The steam/electrical section features the same design and cost ($700/kw) of a 500 MWe coal plant. A 1 GWe nuclear component requires less than 400 tons of supercritical alloys and other exotic materials.[19]

proposed new text
<< updated in main article >>
New reactor designs have been evolving for decades, and may continue for many more. ThorCon chose a design using existing well-tested technology that could be rapidly deployed while other companies perfected their more sophisticated designs. They chose a simple upscale of the MSRE [18], a Molten Salt Reactor that had been tested at Oak Ridge National Laboratory in the 1960's. In choosing this simpler design, ThorCon avoided many problems of more advanced designs, including the need for expensive materials to ensure long lifetime, worries about diversion of fissile material, and unexpected costs that might come up with less proven newer technologies. Fuel efficiency is better than existing PWRs (Pressurized Water Reactors), but still far short of what can be achieved in an FNR (Fast Neutron Reactor). Temperature is much higher than existing PWRs and high enough for some process heat applications, but still short of what can be achieved in an HTGR (High Temperature Gas-cooled Reactor). ThorCons are not breeder reactors. They require an ongoing supply of enriched uranium. Fast Neutron Reactors can burn anything [19] - spent fuel from PWRs, old bomb cores, thorium, even depleted uranium.