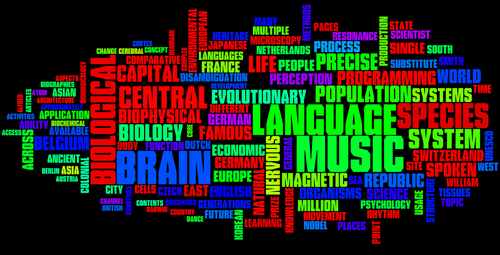 (CC) Image: Created with Wordle.
Overview. Such tag cloud-like images can be linked to the respective articles via ImageMap, as in the Biology Week logo or in music perception.

This is a list of topics to which I might add contents (an explanation of the colours and icons is here). If you are up to work on one of those, feel free to drop me a line to initiate joint action. In case you find no match, you may have more luck with the lists of music psychology topics, biology topics, core articles, words with multiple uses, special pages, most linked pages or most wanted articles.