what I think we need in scholarship is the web, but editable — Peter Sefton 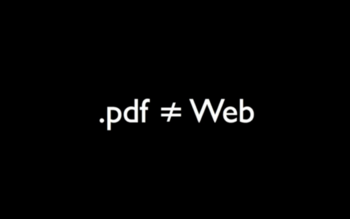 Science is already a wiki if you look at it a certain way. It’s just a highly inefficient one — the incremental edits are made in papers instead of wikispace, and significant effort is expended to recapitulate existing knowledge in a paper in order to support the one to three new assertions made in any one paper. — John Wilbanks. Illustration: papers and wikispace.

I’m feel­ing frus­trated. What else can you feel when the sys­tem is bro­ken, you know that sys­tem must change, but there is lit­tle incen­tive for those per­pet­u­at­ing the sys­tem to change it for the better. — Steven Bell

Whenever danger exists of unnecessarily duplicating efforts to solve problems, ought not scientists try to discover whether the experiments have been performed elsewhere? Ought not all scientists be concerned about rapid publication and wide distribution of results, and even of experiments under way, so as to avoid waste? When a scientist in one field discovers evidence of methods which he cannot use but which may be useful in other fields, ought he not inform others about it? If a new and better technique has been discovered in one field, ought not scientists in other fields investigate its workability, or adaptability, in their fields? When a newly confirmed discovery in one field implies need for revising assumptions or conclusions in another field, do not scientists in the one field have a duty to publicize it and scientists in the other field a duty to hasten to inform themselves about it? — Archie J. Bahm

I want publishers to publish my workflows. — Philip E. Bourne

What I wonder is why professors don't curate [pages on] Wikipedia and add course materials and open access sections of textbooks, much of which they post online anyways. We aren't really seeing the potential that you would hope for with all of the Web 2.0 tools out there. We aren't seeing the academic community take advantage of them as much as other subsets of the community. — David Lipman

Wikipedia is probably the most robust Petri dish we have for actually studying the process of words and contributions, because it is auditable. — Peter Frishauf

Better still, if you assert something said in another paper, sod the citation, transclude the relevant text, with a full electronic citation allowing you to verify it. — Christopher Gutteridge

What if everyone in the world were in your lab – a ‘hive mind’ of sorts, but composed of countless creative intellects rather than mindless worker ants, and one in which resources, reagents and effort could be shared, along with ideas, in a manner not dictated by institutional and geographical constraints? — Chris Patil and Vivian Siegel

The Internet represents an opportunity to change this system, one which has created a 300-year-old, collective long-term memory, into something new and more efficient, perhaps adding in a current, collective short-term working memory at the same time. With new online tools, scientists could begin to share techniques, data and ideas online to the benefit of all parties, and the public at large. — Robert J. Simpson, paraphrasing Michael Nielsen

While scientists have gloried in the disruptive effect that the Web is having on publishers and libraries, with many fields strongly pushing open publication models, we are much more resistant to letting it be a disruptive force in the practice of our disciplines. — James Hendler

There is but one journal: The scientific literature. — Richard Gordon

Technological revolutions are a privileged moment in which old customs and legitimations may be put under scrutiny. The world of academy should not risk at missing this opportunity to rethink about the fundamental aims and responsibilities of our profession. — Gloria Origgi

The current Open Access model is provisioning for legacy genres and formats of scholarly communication. That's great for archival purposes, but this is not the next real destination for scholarly discourse. Why? Because consequential intellectual work takes place in myriad ways outside of traditional scholarly genres, that's why, and the digital realm is ready to capture, organize, value, and disseminate those other ways of generating knowledge. — Gideon Burton