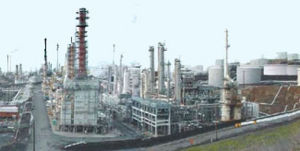 The terms upstream, midstream and downstream are often used to refer to the major sectors or operational components of the petroleum industry.

The upstream sector includes the searching for potential underground or underwater oil and gas fields, drilling of exploratory wells, and subsequently operating the wells that recover and bring the petroleum crude oil and/or raw natural gas to the surface.

Petroleum crude oil is a mixture of hundreds of hydrocarbons, many of which contain sulfur that is removed during the refining of the crude oil. Raw natural gas also has sulfur-containing compounds, which are removed in processing of the raw natural gas before it is distributed to consumers. The sulfur-containing compounds removed in the refining and processing of petroleum crude oil and raw natural gas are subsequently converted into byproduct elemental sulfur. The production and marketing of the byproduct sulfur is considered to be part of the downstream sector.

The vast majority of the 64,000,000 metric tons of sulfur produced worldwide in 2005 was byproduct sulphur from refineries and natural gas processing plants.[2]