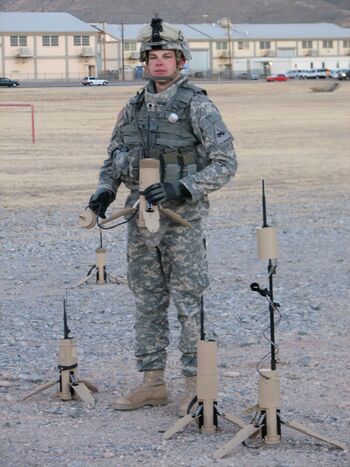 Unattended Ground Sensor (UGS) are generally seen as military devices that can provide surveillance of ground areas, sending alerts back by telemetry. Some of the earliest versions were deployed in the Vietnam War. [1]. During Vietnam, these did not provide the functionality desired of the McNamara Line and Operation Igloo White. They have improved considerably, but still complement a humans on the ground and do not always replace them.

In the US, many of the Igloo White technology came from Sandia National Laboratories, who subsequently designed the Mini Intrusion Detection System (MIDS) family, and the US Marine Corps' AN/GSQ-261 Tactical Remote Sensor System (TRSS). Another major US Army initiative was the Remotely Monitored Battlefield Sensor System (REMBASS), which it upgraded to Improved REMBASS (IREMBASS), and now is considering REMBASS II. The REMBASS generations, for example, increasingly intertwine interconnections of infrared MASINT, Magnetic MASINT, seismic MASINT, and acoustic MASINT

ADAS sensors were in a US program, Army Rapid Force Projection Initiative advanced concept technology demonstration (ACTD), using OASIS acoustic sensors and central processing, but not the electro-optical component. ADAS sensors are emplaced in clusters of 3 or 4, for increased detection capability and for triangulation. Textron says that the ADAS acoustic sensors can track fixed-wing aircraft, helicopters, and UAVs as well as traditional ground threats.

UGS are especially challenging in urban areas, where there is a great deal more background energy and a need to separate important measurements from them. Acoustic sensors will need to distinguish vehicles and aircraft from footsteps (unless personnel detection is a goal), and things such as construction blasting. They will need to discriminate among simultaneous targets. Infrared imaging, for the urban environment, will need smaller pixels. If either the targets or the sensor is moving, micro-electromechanical accelerometers will be needed.

Restructuring of the United States Army

As part of the Restructuring of the United States Army, new generations are being deployed in the Scout/Cavalry/Reconnaissance, Surveillance and Target Acquisition Squadrons of Brigade Combat Teams, both in a general tactical version and one specific to urban combat.[2]

Microclimate information is important for a variety of reasons, ranging from calculating atmospheric effects on artillery to interpreting sensor artifacts. The Remote Miniature Weather Station (RMWS), from System Innovations, is an air-droppable version with a lightweight, expendable and modular system comprised of two components; a meteorological (MET) sensor and a ceilometer (cloud ceiling height) with limited MET. The basic MET system is surface-based and measures wind speed and direction, horizontal visibility, surface atmospheric pressure, air temperature and relative humidity. The ceilometer sensor determines cloud height and discreet cloud layers. The system provides near-real-time data capable of 24-hour operation for 60 days. The RMWS can also go in with US Air Force Special Operations combat weathermen [3] The man-portable version, brought in by combat weathermen, has an additional function, a remote miniature ceilometer. Designed to measure multiple layer cloud ceiling heights and then send that data via satellite communications link to an operator display, the system uses a Neodynium YAG (NdYAG), 4 megawatt non-eye safe laser. According to one weatherman, "We have to watch that one,” he said. “Leaving it out there basically we’re worried about civilian populace going out there and playing with it—firing the laser and there goes somebody’s eye. There are two different units [to RMWS]. One has the laser and one doesn’t. The basic difference is the one with the laser is going to give you cloud height."

He cautioned that the unit was not without its operational restrictions or limitations: the primary one being eye safety. As an example, one ancillary system to the RMWS is the remote miniature ceilometer. Designed to measure multiple layer cloud ceiling heights and then send that data via satellite communications link to an operator display, the system uses a Neodinum YAG (NdYAG), 4 megawatt non-eye safe laser.

UGS, in the cancelled Future Combat Systems of the U.S. Army, were intended to replace the improved REMBASS (I-REMBASS) systems now in use, which employ a mixture of electro-optical, magnetic, vibration/seismic, and acoustic sensors. Some of the technology will continue in development or deployment.