USS O'Kane (DDG-77) is a United States Navy destroyer of the "flight 2" variant of the Burke-class. She was built at the Bath Iron Works and was the second ship commissioned, on 28 March 1998, in her home port, Pearl Harbor, Hawaii. In operation, she is assigned to Destroyer Squadron 31 of the United States Pacific Command.[1] 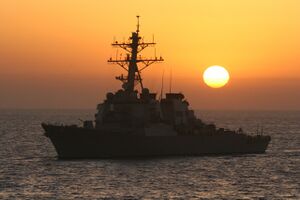 She is part of the Pacific Fleet's Mid-Pacific Surface Combatant Operational Employment, a program that increases tempo of operations by fully basing ships at Pearl Harbor, rather than sending them back to San Diego.

In February 2009, she participated in ANNUALEX 20G, a regular exercise with the Japanese Maritime Self-Defense Force, and the defense of Iraqi oil platforms in the Persian Gulf.

In 2007, the O'Kane was part of the Carrier Strike Group built around the USS Stennis (CVN-74), operating with the United States Fifth Fleet in the Middle East. Fifth Fleet is the naval component of United States Central Command. The Stennis CSG will operate with that of the USS Eisenhower (CVN-69), in Eisenhower Carrier Strike Group, already in the Central Command area of operations. The strike groups will support Operation Enduring Freedom, Operation Iraqi Freedom and Combined Joint Task Force Horn of Africa and will conduct maritime security operations. [2]

Her captain is CDR Timothy Steadman. CDR Derek A. Trinque is the executive officer, and John A. Hall is Command Master Chief.

This department centers around the computers and sensors of the AEGIS battle management system, coordinating the effects of the ship as a whole, although the Weapons Department actually maintains the weapons it controls.

The Weapons Department officer is responsible for three divisions of specialists, and two missions that are staffed from the department:

Flight II Burkes can launch and recover helicopters, but, as opposed to Flight IIA, do not have hangars and full support facilities. Nevertheless, the ship has RAST cabling for helicopter handling and can temporarily support them to localize and attack submarines and conduct Over-The-Horizon Targeting missions.

FORCE PROTECTION AND ANTI-TERRORISM. Select personnel on the ship are trained to implement force protection measures. Whether in homeport or overseas, Force Protection is vital in ensuring the safety and security of the ship so that the crew can perform its mission.

VISIT, BOARD, SEARCH AND SEIZURE. VBSS teams are utilized for direct interaction with theatre-wide mariners. This is to ensure that freedom of navigation is tenable, international and national sanctions are enforced, and our international relations with the world’s mariners are in accordance with na

In many respects the core department, Operations runs the ship as a ship. While Weapons may load the launchers and Combat Systems aims them, operations navigates the ship to the place they will be used.

Operations Department principle role is to support the ship in sustained operations at sea as a part of a Joint Task Group or as an independent unit in Anti-Air, Anti-Surface, Anti-Submarine and Strike Warfare operations against the enemy. Secondary roles include fixed and rotary-wing aircraft control, electronic and celestial navigation, electronic and visual communication, Naval Gunfire Support, Electronic Warfare, Search and Rescue.

If the crew replaces broken parts with it, eats it, or spends it, the Supply Department is involved. 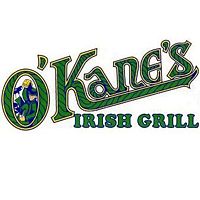 S-1 division runs inventory, storage, and dispensing of parts. Two divisions, S-2 and S-5, provide food services, S-2 to the crew and S-5, with the same meals but different accounting to the officers.

S-3, or Sales and Services Division, runs the Barber Shop, Laundry, Ship's Store and Vending Machines. "If it needs to be bought, cut, or washed, the SHs are the professionals that get the job done." S-4 Division is the finance department, from pay to travel to safe deposit. The ship has an Automated Teller Machine (ATM).

This department both handles administrative services for the command, and includes the ship's personnel, medical, and master-at-arms functions.

Under the ship's Chief Engineer, four divisions run the engines, auxiliary mechanical and electrical equipment, and provide damage control. While Supply Division cooks the food, Engineering Division makes the fresh water. Fresh water distillation, steering control, damage control, drainage, and sewage treatment. The Engineering Department is led by the Engineering Officer, known as "CHENG," who supervises all engineering evolutions and ensures his department maintains all equipment properly and is capable of responding and recovering from any casualty that may occur in the engineering plant.

The Flight II is an incremental modification from Flight I; the most significant change came with Flight IIA, in which the AGM-84 Harpoon missile launchers were replaced by permanent helicopter hangars.