It is a policy of the U.S. government that its nuclear weapons, production facilities, National Command Authority and other command and control, and delivery systems will combine into a comprehensive system of nuclear surety "that make them safe, secure, and under positive control. Surety encompasses design features, material, personnel, and procedures."[1]

Nuclear surety also extends to the nuclear research and production infrastructure, to military and civilian nuclear power, to diversion of commercial and medical radioactives and as part of protective measures against nuclear terrorism and radiological weapons.

A number of these techniques were shared with other nuclear powers, in the interest of avoiding accidental war. Not all were accepted; not all were shared. Since the end of the Cold War, surety, in the broadest sense, has included efforts to bring surplus experts and critical nuclear material, in the former Soviet Union, outside the reach of non-national groups and rogue nations.

Certain technologies are potentially as decisive or destructive as nuclear weapons, especially the largely obsolete small tactical nuclear weapons, which have largely been replaced with precision guided munitions. Surety and positive control apply to them as well, and such things as land mines and blinding lasers also are coming under arms control treaties.

The positive control architecture begins by placing the command authority for the use and critical manipulations at the highest policy level of the government, but, even there, enforcing the two-man rule. No action affecting the safety or use of nuclear weapons is ever left to one person, so the National Command Authority, the civilian authority with ultimate responsibility, is made up of both the President of the United States and the U.S. Secretary of Defense, or their successors.

Civilian authority over the most powerful of weapons was not always clear-cut. From the end of the Second World War, to the late days of the Eisenhower Administration in the late fifties, there was conflict between military and civilian authority. Eventually, Eisenhower, a former general, took policy control and started the machinery that produced the Single Integrated Operational Plan, first published as a classified document in 1962.

Two-person control continues through all command and control levels, from high military levels down to weapon maintenance and firing crews. Control has not always been perfect; in 2009, six nuclear missiles were, through a combination of inattention, inadequate procedures, and failure to carry out inspections, were transferred unknowingly from one U.S. base to another.

In 2009, six cruise missiles, due for retirement, were to be flown from Minot Air Force Base to Barksdale Air Force Base. Unknown until well after they arrived, and were not under special guard, they carried live nuclear warheads.

Resulting investigations contributed to the firing of the Secretary of the Air Force, the Chief of Staff of the Air Force, and a number of senior commanders. Over 70 people were disciplined and there were major reviews and changes in procedures. 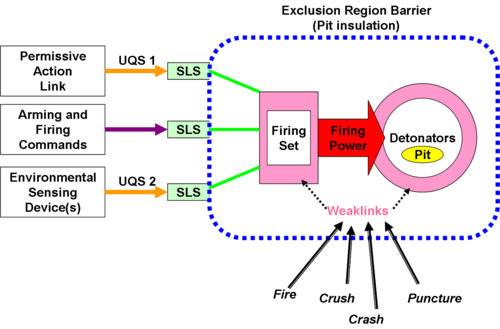 Weapons themselves have a growing number of internal and colocated safeguards against accident and misuse. The graphic shows a schematic of a weapon, which is surrounded by a mechanically and electrically robust exclusion region, into which flow several unique signals (UQS) recognized by designated Strong Links, probably through a cryptographic mechanism.

The exclusion system barrier also provides thermal protection to give a fire-resistant pit, and a tamper-resistant shield. Certain weapons have also had mechanical safing mechanisms, such as a neutron-absorbing wire that extended into the pit until arming, or, in the somewhat dubious case of the British Violet Club, a bagful of ball bearings.

These unique and operational signals arm the strong link switches within the weak link-strong link safeguard of the firing set, which are probably part of the high voltage system that charges the capacitors that power the multiple detonators. If any predesignated weak link condition comes into being, such as crushing or puncture of the exclusion barrier, fire surrounding it, or a crash if the weapon is fuzed for airburst, the weak link opens and breaks the firing circuits. For certain conditions, such as crashes, a more complex weak link sensor may initiate a self-destruct for the weapon, one which will not produce a nuclear yield.

An emergency destruct command may be used to actuate the weak link, a small demolition charge, or some mechanical technique that makes the bomb unusuable without complete factory overhaul.

Fission device implosion systems must have detonators triggered, with precise timing, at multiple points for the implosion to occur. The one-point safe criterion requires a one-in-a-billion chance that a single detonation would produce a nuclear yield of greater than two kilograms.

Stockpile stewardship ensures that weapons that have been distributed to operational units, or are in ready storage, will function if needed. Minimally, this includes ensuring that regular and preplanned maintenance is performed. Next, it verifies that components of the weapons will perform as needed.

Nuclear weapons have a number of components that have to be replaced periodically, starting with specialized batteries, and radioactive materials, especially tritium, which decay to a point of uselessness. High explosive components have been found to lose necessary mechanical properties over time.

Verifying explosive properties can come from testing samples of the mixture, from testing weapons with a simulated physics package, and true nuclear testing.

Significant nuclear accidents, U.S. and others